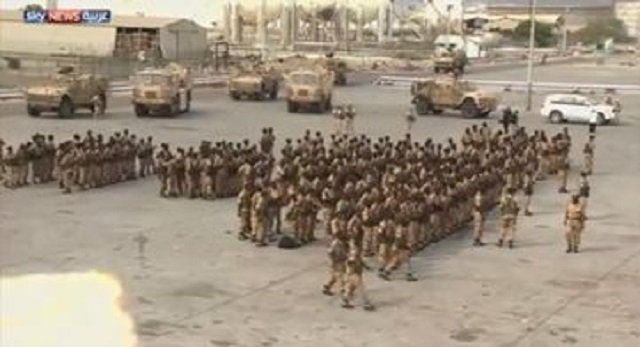 After el-Sisi Asked For Too Much Money, Sudan Steps In

October 18, 2015 7:13 am 0
The Arab Curse
Hell beyond hell: Syria snipers use unborn babies as target practice
A Golden Opportunity for US Intelligence to Squeeze Assad

After el-Sisi asked for too much money to supply Egyptian soldiers to defend Saudi interests in Yemen, instead a battalion of Sudanese troops arrived in Yemen’s southern port city of Aden on Saturday, military officials said, bolstering Saudi-led Arab forces trying to keep out the Iran-backed Houthis and curb the growing presence of Islamist militants.

Aden, a strategic port and shipping hub, became the seat of the Yemeni government earlier this year after the Houthis, a clan from northern Yemen which follows the Zaydi branch of Shi’ite Islam, seized the capital Sanaa and forced President Abd-Rabbu Mansour Hadi to flee to the south.

A military source in Aden said that 300 Sudanese soldiers and officers arrived by sea on Saturday. Their purpose was to “help maintain security for the city against the Houthis and Saleh,” the source said, referring to former President Ali Abdullah Saleh, whose supporters have sided with the Houthis.

This came about after el-Sisi asked for too much money to dispatch Egyptian troops to Yemen on behalf of Saudi Arabia.

Hadi escaped to Saudi Arabia as the Houthis advanced towards Aden in March and has since been back only for a brief visit. But Prime Minister Khaled Bahah returned after anti-Houthi fighters, backed by the Arab coalition, drove the Houthis and their allies out of the city in July.

However, they have not managed to restore security there. Islamist militant suicide bombers killed 15 people in attacks on the Yemeni government’s headquarters and Arab coalition outposts in Aden on Oct. 6.

“Our troops in Yemen are ready to do their military task under the command of the alliance military leadership,” Sudanese army spokesman Brigadier General Ahmed Khalifa Alshami said. “Sudan is committed to restore legitimacy in Yemen.”

The Arab coalition says its aim is to restore Hadi’s government to power in Yemen. At least 5,400 people have died since it began an air offensive in March.

They will join contingents from the United Arab Emirates, Saudi Arabia and Bahrain on the ground.

Hadi supporters, backed by Arab forces, recently made some gains in the strategic Bab al-Mandab strait and in Marib, a province east of Sanaa and home to much of Yemen’s oil wealth. But the Houthis remain in control of much of the country, despite almost daily air strikes.

In Aden, residents report that armed men, including Islamist militants associated with al Qaeda, roam the streets. Unidentified gunmen killed a UAE national in Aden on Saturday at a shop, according to a local security source. The UAE state news agency WAM reported that a coalition soldier had died but gave no further details.

After el-Sisi Asked For Too Much Money, Sudan Steps In

What is Wrong with the Middle East?
Sarkozy: 8,000 Killed in Homs in 3 Weeks
That’s why they kill: Bachir of Sudan is Their Glass Ceiling
Iranian Terror 594