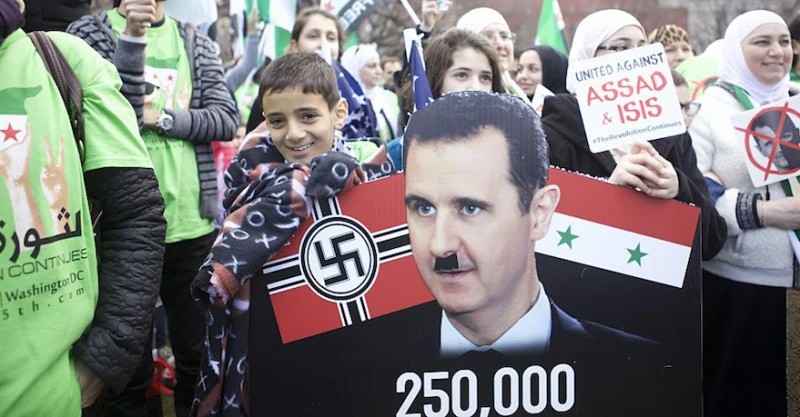 May 4, 2020 6:45 am 0
Diplomatic Solution for Syria is Impossible Without Assad on Trial
Syrian Opposition Groups Agree Assad Must Go
Don’t Panic Assad Will Fall After Testing

An article in the Middle East Monitor claims that Russia, along with Turkey and Iran, have decided that Assad has become a liability. It cites sources close to the Kremlin that his fate is on the table. Will Putin remove Assad from power?

The article published the following paragraphs:

The Russian International Affairs Council (RIAC) expects that Russia, Turkey and Iran will reach a consensus to remove the head of the Syrian regime, Bashar Al-Assad, and establish a ceasefire in exchange for forming a transitional government that includes the opposition, members of the regime and the Syrian Democratic Forces (SDF).

The RIAC, which is known to be close to the decision-makers in the Russian government, said in a report that a Russian organization named the Foundation for the Protection of National Values, affiliated with the security services and the office of President Vladimir Putin, has been conducting an opinion poll in Syria.

An opinion poll is far from an outright removal, but it’s a good start if one of the questions is: Would you support a government that represents all the people of Syria and is able to protect the minorities?

To make sure Syrians respond truthfully and without fear, the Russian Army should accompany the pollsters, or, if by phone, should be the ones conducting the poll with a heavy Syrian accent.

If Assad departure is a foregone conclusion, which sounds unreal, then it’s time to celebrate. The world has had its hopes dashed before when similar stories appeared. The truth is nobody knows what the Kremlin’s intentions are. However, the timing is quite peculiar due to the fact that Assad is trying to reign in his cousin Rami Makhlouf. The latter has challenged Assad in a video that went public.

If the story is true, then we say it’s about time. The psycho ruling Syria today has expired a long time ago. He is neither a leader, nor a man when he gasses women and children while they sleep. Not even Putin, or his hero Stalin, made that mistake.

It’s about time Syria finds its way out of the darkness of the Assad clan. Fifty years of ruling with terror is fifty years too long. A new Syrian government representative of all the people while respecting and protecting all the minorities is to everyone’s advantage in the region. With Assad removed, the political solution that all parties agree to will kick start Syria’s reconstruction. It will also help Syrians to resettle back into their homes.

We believe an orderly Assad removal from power is for everyone’s best interests. Everyone. Including the United States and Israel. As well as all the Arab countries. Especially Syria’s neighbors that suffered too long from Assad’s tenure and terror.