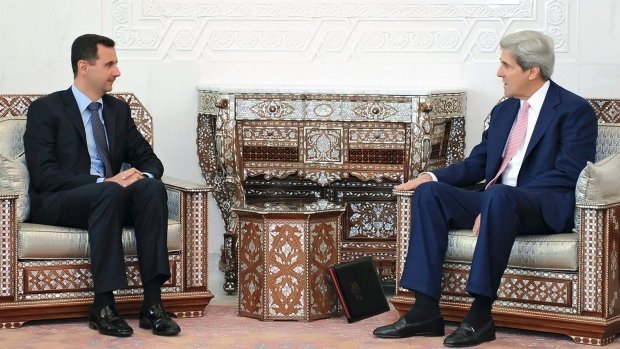 Why West Strikes ISIS But Not the Assad Regime

May 22, 2015 10:06 am 0
ISIS smiles big at Russia’s offensive in Syria
If You Think Assad is a Monster, Wait to See His Son Hafez
Obama Nixed CIA Plan That Could Have Stopped ISIS

Barack Obama wants the Syrian civil war to continue because he has not helped defeat Assad nor did he help the Syrian moderates when the time was ripe to help them. His goal may be the splitting of Syria if we are able to forget that Obama wants Iran to win in the region.

On the other hand, the Arab countries want Iran defeated. Both goals are playing out in Syria today.

Whatever plans both have, ISIS spoiled them because it was an unexpected aberration. First forged by Assad for his own purposes, the West fought ISIS partially to protect their homelands but also fought it because it a spoiler.

Jabhat al-Nusra was designated a terrorist organization by the United States, yet Obama is not striking it. Why not? Why the West strikes ISIS only?

The West may want to split Syria into three territories and are waiting for Assad to take the first major step by splitting the Alawites from the rest of the country, which explains assisting the Kurds in the north (i.e. Kobane).

The endgame assist both groups. If Iran gets tired resource-wise, Assad splits; if Assad splits because of domestic pressure, Iran becomes weaker.

The only reason why Assad is kept alive and kicking is maybe to split Syria. This is why the West strikes ISIS, but not the Assad regime. The sooner he peels the minority communities the sooner the war will end.

Syrian civilians dying, and ignored, at the hands of both Assad and ISIS are just collateral damage in the service of the greater goal.

There is no rhyme or reason for the U.S. to move heaven and earth to strike ISIS only days after it beheaded James Foley and then sit back and watch Assad barrel bomb and gas civilians and not lift a finger to stop him. The Assad regime held James Foley. It is still a mystery to the rest of the world how ISIS got hold of him.

It is important to seek answers here because the killing of James Foley prompted Barack Obama to strike ISIS but no amount of Assad killing of innocent women and children moved him to strike the Assad regime. Is Obama waiting for the slow defeat of Assad, which will prompt him to mobilize to split Syria?

The problem is that ISIS won’t go away. It is getting stronger because the perception among Sunni Arabs is that Obama is feeding Shia terror to strike Sunni civilians. This perception is wreaking havoc in the goals to split Syria or weaken Iran that no one was able to foresee or control today.

The Syrian civil war may end when the Christian and the Alawite minorities split themselves from Damascus or when Iran and Hezbollah throw the towel. This explains why Iran, once in a awhile, challenges the West by promoting its robust support for the Assad regime.

Syria has become an Arab trap for Iran and Hezbollah; a sort of a fisherman’s net to suffocate, through attrition, Iranian terror in the Levant.

Why West Strikes ISIS But Not the Assad Regime