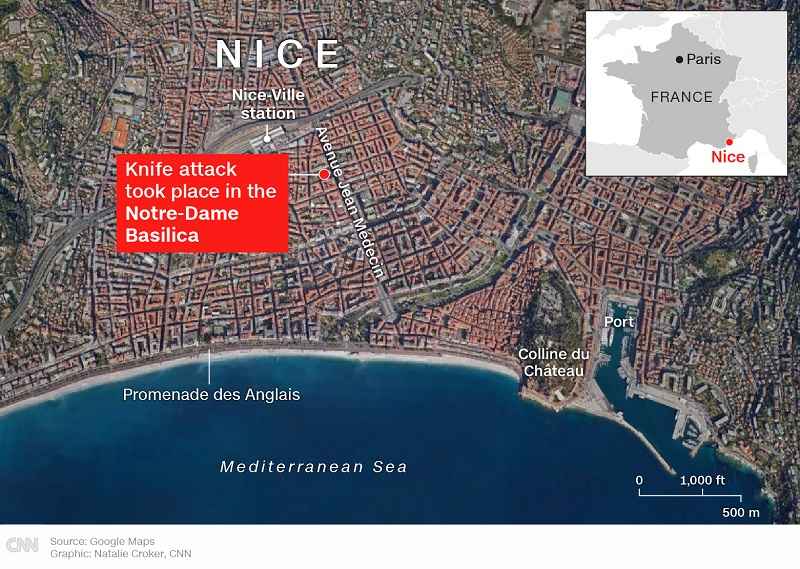 France Has an Islamist Problem that Diplomacy Cannot Resolve

An attacker armed with a knife killed three people at a church Thursday in the Mediterranean city of Nice, French authorities said. It was the third attack in two months in France amid a growing furor over caricatures of the Prophet Muhammad that the satirical newspaper Charlie Hebdo re-published. France has an Islamist problem that normal diplomacy or negotiations cannot resolve. We all stand by France today.

The French authorities reported other confrontations and attacks in the southern city of Avignon.

The French Police wounded the Islamist terrorist in Nice. and hospitalized him after the killings at the Notre Dame Basilica. The church stands at less than a kilometer from the site in 2016 where another attacker plowed a truck into a Bastille Day crowd. That Islamist terror attack killed 86 innocent people, including 10 children.

FRANCE SHOULD ROUND THOUSANDS OF SUSPECTED ISLAMISTS

France’s anti-terrorism prosecutor’s office opened an investigation into the Nice killings. The latest Nice terror attack marked the third one since the September opening of the trial of 14 terrorists linked to the January 2015 killings at Charlie Hebdo and a kosher supermarket. The gunmen in the 2015 attacks claimed allegiance to the Islamic State group and al-Qaida.

According to two unnamed police officials, French authorities believe Thursday’s attacker to be acting alone. Police is not searching for other assailants.

He cried ‘Allah Akbar!’ over and over, even after he was injured. The meaning of his gesture left no doubt.

Estrosi told BFM television that two women and a man had died in the attack. Two died in church and a woman victim who fled died of her wounds in a nearby cafe.

French media showed the Nice neighborhood locked down and surrounded by police and emergency vehicles. Witnesses could hear sounds of explosions as sappers exploded suspicious objects.

FRANCE HAS AN ISLAMIST PROBLEM THAT DIPLOMACY CANNOT RESOLVE

The lower house of parliament suspended a debate on France’s new virus restrictions and held a moment of silence Thursday for the victims. Prime Minister Jean Castex rushed from the hall to a crisis center overseeing the aftermath of the Nice attack. French President Emmanuel Macron planned on traveling to Nice later in the day.

In the southern city of Avignon later in the morning, an armed man was shot to death by police after he refused to drop his weapon and a flash-ball shot failed to stop him, one police official said. And a Saudi state-run news agency said a man stabbed a guard at the French consulate in Jiddah, wounding the guard before he was arrested.

The French Council of the Muslim Faith condemned the Nice attack and called on French Muslims to refrain from festivities this week marking the birth of Muhammad “as a sign of mourning and in solidarity with the victims and their loved ones.”

The attack came less than two weeks after another assailant decapitated a French middle school teacher. That teacher showed the caricatures of the Prophet Muhammad for a class on free speech. Charlie Hebdo published those caricatures, which the terrorists who gunned down the newspaper’s editorial meeting in 2015 cited.

In September, a man seeking asylum in France attacked bystanders outside Charlie Hebdo’s former offices with a butcher knife.