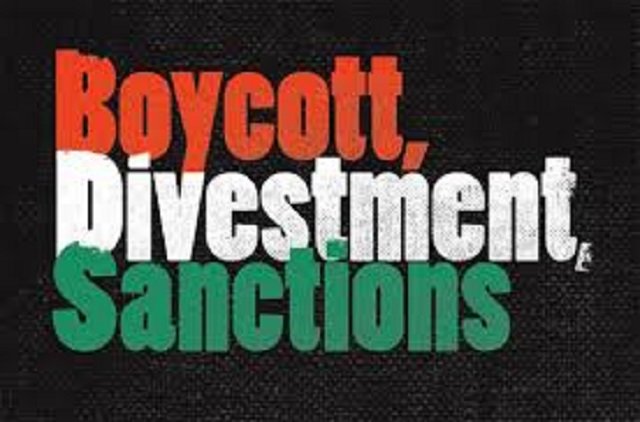 What Has Obama Done to Stop the Boycott Movement Against Israel?

July 7, 2015 8:26 am 0
Assad is Encircling Israel with Missiles and Angry Mobs
What is next for Senator Rand Paul? Israel?
Last Straw to Save Assad is Gaza

Presidents have a way, with their silence, to drive a cause as much as they do with their vocal support.

Ten years ago, a small group of Palestinian activists had a novel idea: Inspired by the anti-apartheid movement, they called for a global boycott movement against Israel as a nonviolent method to promote the Palestinian struggle for independence.

Long confined to the sidelines, the so-called BDS movement appears to be gaining momentum – so much so that Israel has identified it as a strategic threat on a par with Palestinian militant groups and the Iranian nuclear program. Israel says the movement is rooted in anti-Semitism. We agree.

We have to ask the question: What has Obama done to stop the Boycott Movement against Israel? This is how we know he is Antisemitic.

Since Obama became president, that movement saw the light of day. Accident? Hardly. Blame the BDS movement in-roads on inconspicuous encouraging signs Obama demonstrated amply every time he confronted Israel and its leaders.

The BDS movement – named for its call for boycotts, divestment and sanctions against Israel – began as an idea by 170 Palestinian civil society groups worldwide in 2005. It has grown into a global network of thousands of volunteers lobbying corporations, artists and academic institutions to sever ties with Israel.

Its members include campus activists, church groups and even liberal American Jews confused what Israel means to Jews. The same ones who voted for Obama blindly.

Most worrying for Israel, some of the group’s core positions toward products made in West Bank settlements are starting to be embraced by European governments. Although the EU says it opposes boycotts of Israel, it is exploring guidelines for labeling settlement products, which many in Israel fear could be a precursor to a full-fledged ban.

Settlement products, which make up a tiny percentage of Israeli exports, include wines, dates and cosmetics.

“The concern is that there will be a spillover to a much wider phenomenon that will become mainstream and erode support for Israel,” said Emmanuel Nahshon of Israel’s Foreign Ministry.

Israeli leaders consider the movement to be the latest in a history of antagonists out to destroy the Jewish people. What has Obama done to stop the Boycott Movement against our ally?

“We are in the midst of a great struggle being waged against the state of Israel, an international campaign to blacken its name,” Prime Minister Benjamin Netanyahu said recently. “It is not connected to our actions. It is connected to our very existence.”

Last month, Britain’s national student union joined the movement. Last week, the top legislative body of the United Church of Christ voted to divest from companies with business in the Israeli-occupied territories, following a similar move by the Presbyterian Church (U.S.A.) last year. The Episcopal Church and Mennonite Church USA also considered divestment proposals recently, with the Episcopals rejecting it and the Mennonites deferring action for two years.

Perhaps the biggest blow was last month’s announcement by the chief executive of French mobile phone giant Orange that he wanted to end his partnership with Israeli carrier Partner Communications. He cited his desire to improve business in the Arab world. Although CEO Stephane Richard later traveled to Israel to apologize, Orange and Partner announced plans to unwind their deal.

The idea of boycotts is extremely sensitive in Israel. The Nazis launched a nationwide boycott of Jewish businesses and artists – often accompanied by acts of violence and anti-Semitic slogans – in the 1930s Germany ahead of the Holocaust. In the 1970s and 1980s, Arab countries pressured companies doing business with them to shun Israel. Currently, Israel is fending off attempts by the boycotters to compare Israeli policies in the West Bank to South African apartheid.

“The attacks on the Jews were always preceded by the slander of the Jews,” Netanyahu recently said.

It remains difficult to quantify the BDS movement’s actual achievements.

A February report by Israel’s Finance Ministry concluded the BDS movement has had a negligible economic impact. But it outlined some worst-case scenarios, including EU government-led boycotts or cancellation of free-trade agreements.

Likewise, a recent study by the Rand Corp. said that while the BDS movement “has not yet had a significant negative effect” on Israel, it is growing. It noted Israeli leaders’ fears it could have “substantial detrimental effects” on the economy.

Obama, on the other hand, never declared the same. His silence speaks plenty though.

What Has Obama Done to Stop the Boycott Movement Against Israel?

Where is Goldstone When it Comes to Crimes Against Humanity by Assad?
Observing Friday by Observing Shabbat
‘When we told them we were Jews from Israel, they kissed us’
Slippery Barack Obama 976