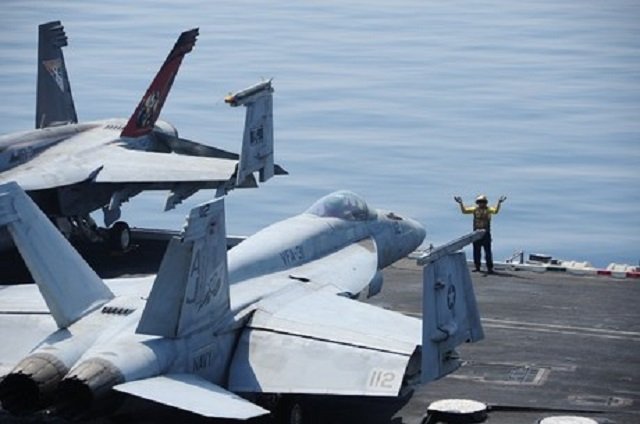 U.S. warplanes have destroyed 283 fuel tankers that were being used to transport oil to help fund the Islamic State group in eastern Syria, officials said Monday.

The huge air raid is another milestone as the U.S.-led coalition intensifies its campaign against the jihadists and focuses on their oil-smuggling infrastructure, estimated to net the group some $500 million a year.

Pentagon spokesman Captain Jeff Davis said the strike occurred Saturday between Al Hasakah and Dayr Az Zawr in the east. It came less than a week after another, similar strike destroyed 116 IS fuel tankers.

Just as in that earlier case, U.S. jets on Saturday first conducted a low-flying “show of force” over the fuel tankers, then dropped leaflets telling drivers to flee.

The Pentagon says that while the trucks were being used to support the IS group, the drivers themselves were not jihadists.

U.S. A-10 air-to-ground attack planes and AC-130 gunships then destroyed the tankers, Davis said, adding there had been no reports of civilian casualties.

“We have very methodically gone through this to ensure that we are doing this in a way that is humane and not going to cause civilian casualties, also recognizing the fact that these trucks are an integral link in the revenue stream that is providing revenue … to ISIL.”

Russia, which is conducting a separate air campaign in Syria, claims to have destroyed dozens of fuel trucks and has declared a “free hunt” for any trucks carrying oil “belonging to terrorists” in IS-controlled areas.

A U.S. military spokesman said that in the earlier U.S. strike that destroyed 116 fuel tankers / trucks, the leaflets dropped stated: “Get out of your trucks now, and run away from them.”