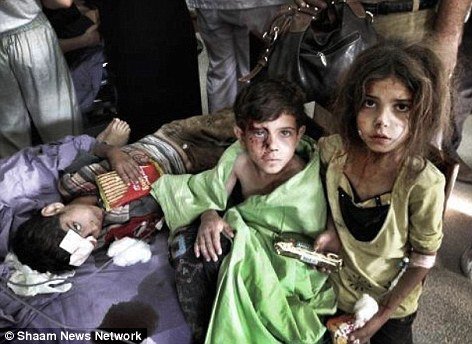 Every birth of a nation starts with a story, but this story is more about the redemption and the revitalization of six nations.

With Iran spreading its specter of terror and extremism, six GCC nations were slowly submitting to the will of its aggressive policies. Two of them, Saudi Arabia and Bahrain, were seriously threatened because of Iranian interference to stir their Shia population.

However, by some miraculous interference, the region experienced, in six months, a 180 degree turn-around that many have yet to digest its consequences.

On March 6, 2011, some 15 courageous boys from the southern city of Daraa, a region known not only for its agricultural center but also for its impoverished people, sprayed, on wheat silos, the words “Al-Shaab Yoreed Iskat al-Nizam” (The People Want to Topple the Regime).

The Assad regime, still perturbed by what happened in Tunisia and Egypt, responded mercilessly. It detained the children and tortured some to set an example for others.

When a day after detention of the children of Dara’a elderly men from the city visited Governor Gen. Atef Najeeb — who also happens to be Assad’s cousin — to inquire about their fate, Najeeb told them

“Forget about your children and go father some more. And if you can no longer father like real men, send your wives to us, we will impregnate them for you.“

On March 6, 2011, the Syrian Rebellion started with an act of free expression, an act of repression, both followed by words uttered by a stupid Syrian General but which will certainly be cited by historians as the first nail in Assad’s coffin.

If you know anything about the honor system Syrians embrace, and certainly Gen. Najeeb knows it well, belittling the manhood of the tough men of Daraa while insulting their wives is a sin beyond sins. For the people of Daraa, life ceased to exist going forward. They all died after hearing the insulting words of Atef Najeeb.

They proved it in the next 3 months as Dara’a exploded and became the center of Syria, the Levant, and the whole Middle East.

Reel forward to 10 months later in an attempt to assess the effect of March 6 on the whole region.

Like the first fissure in a dam, we are witnessing today the first stage of a break to let loose millions of tons of water rushing through the valley the Mullahs of Iran sought to dig stretching from Western Iran to the Mediterranean sea.

All six of the GCC countries were under no illusion as to the Iranian threat and have worked incessantly the last 6 years to stop this juggernaut from sweeping them from their self-imposed rule.

All the politics initiated, the lobbying endeavored, the weapons purchased, the security walls raised, the maneuvers launched, the spying achieved, the begging sprinkled, and the billions spent to control their fate, none of the GCC countries could stop the advance of the Iranian threat.

Likewise, all the terror unleashed, the missiles developed, the nuclear programs planned, the propaganda practiced, the snipers dealing deaths, the tortures achieved, and the detentions arranged could stop 15 children from getting us closer to the end of the Assad regime and the Iranian regime to its knees.

It took 15 children from Daraa to stop the Iranian Mullahs from inconspicuously controlling, through threats, the GCC countries and to save them from a certain end.

It took almost 30 years to build Hezbollah to its present level of political and military achievements, but it took 15 children from Daraa to strike fear in Hezbollah; more than Israel could ever achieve with its mighty Air Force.

As the Arab League meets tomorrow to discuss Syria, may I remind its members that if it took 15 children to save us all from Iran, it will take far fewer children to dictate new policies in the region if you fail to act with reason to save the Syrian people immediately; in addition to creating a special rescue fund for the people of Daraa for their sacrifices.

Never forget what the 15 children from Daraa accomplished.

Never forget that the power of the free expression is limitless.