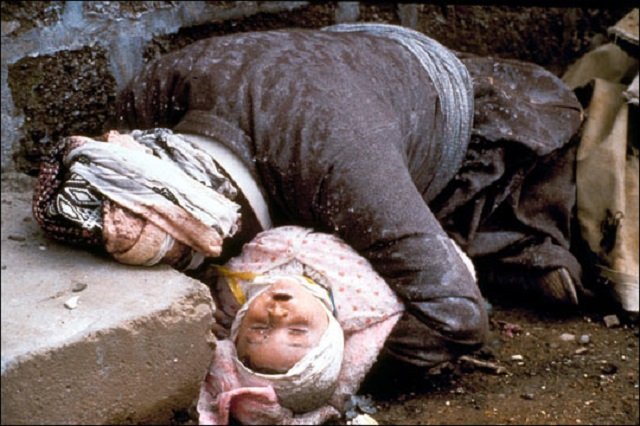 Toxic Weapons Use in Syria Has Become a Routine

The Hague-based chemical weapons watchdog Monday voiced “grave concern” at the continued use of toxic weapons in Syria, calling for those behind such attacks to be held accountable.

A special meeting of the U.N.-backed Organization for the Prohibition of Chemical Weapons (OPCW) met to discuss the findings of three reports after investigations in Syria.

The body expressed “grave concern regarding the findings… that chemical weapons have once again been used in the Syrian Arab Republic,” the OPCW said in a statement.

The use of such toxic weapons by anyone “is unacceptable and would violate international law.”

“Those individuals responsible for the use of chemical weapons should be held accountable.” The OPCW investigations did not directly blame any of the parties in the four-year civil war, aimed at ousting Syria’s psychopath Baschar al-Assad.

But earlier, a U.S. representative to the OPCW, Rafael Foley, said: “The sad reality is that chemical weapons’ use is becoming routine in the Syrian civil war.”

He charged there was only “one conclusion” from the expert reports that “the Syrian regime has continued to use chemical weapons on its own people.”

But accusations have also mounted that extremists with the Islamic State group have resorted to the use of toxic weapons. However, it is highly probable that the Assad regime may have provided IS with the toxic weapons to use against Assad’s enemies fighting to oust him.

The OPCW confirmed earlier in November with “utmost confidence” that mustard gas was used in Syria in August during fighting between rebels and jihadists and “likely” killed a child.

OPCW experts also concluded that chlorine gas was likely used in an attack in Idlib province in March.

Foley also alleged that even though Syria joined the OPCW in 2013 and declared its stockpile of toxic weapons there were still “discrepancies and omissions.”

This “raises the specter that Syria is maintaining covert stocks of chemical agents as part of a program that is it obligated both to declare and destroy,” Foley told the closed-door meeting.

“The regime’s recent use of chemical weapons against their own people makes abundantly clear that they will not hesitate to resort to such tactics as it suits their cynical purposes,”

The European Union also voiced its concerns saying that “the use of chemical weapons by anybody, anywhere and under any circumstances is abhorrent and must be rigorously condemned.”

Under a deal hammered out in 2013 between Russia and the United States following a sarin gas attack on the outskirts of Damascus in which hundreds died, the regime pledged, but did NOT hand over all its toxic weapons to the OPCW for destruction.

Toxic Weapons Use in Syria Has Become a Routine