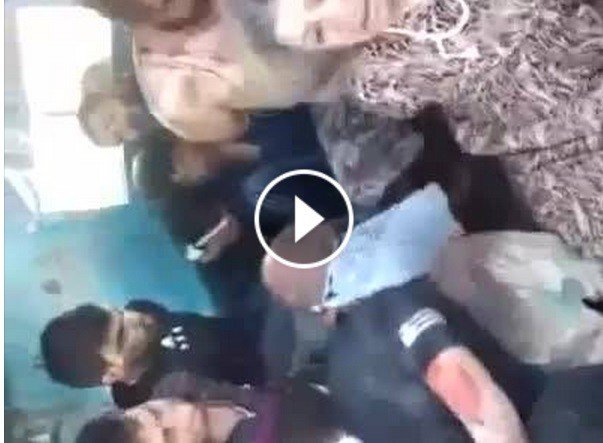 When the free world ignores the violence of a regime committed against innocent civilians or political dissidents, the violent regime considers the apathy of the West as a green light to commit more atrocities.

Just ask Natan Sharansky, the well-known dissident during the Soviet era, of his experiences in the Gulags, and what it meant to him when President Reagan recognized his courage to stand-up to tyranny. Obama, instead, partners and protects tyranny and mass murderers.

The above heart wrenching video shows the Assad forces torture women and men together as they are being transported probably to be executed like so many others in an attempt at cleansing the Sunnis from the region.

The woman is begging them to stop. In response, she is cursed. She could be anyone’s mother, aunt, or sister.

In the video, one of the Assad men is heard telling another “Hurt them, “Hurt them” as the beatings continue and the men scream from pain.

The accent of the beaters is Alawite and those being tortured have an Aleppian accent (From the city of Aleppo). Those videos will keep ISIL alive. Even if destroyed, it will come back again in one form or another to haunt the US because of the Assad terror we see before us.

Do we really want to keep coming back to the region to put out the sectarian fires of Iran and the Assad regime? Don’t ask Obama that question because I truly believe whatever intelligence he claims or others claim for him checks out at the door if it means he can kick the problem for someone else to be concerned about.

My hope the next President will look Obama square in the eye as he enters the White House on January 20, 2017 and tell him “This is your mess Mr. President and I am going to spend the next four years cleaning up after you”.

In February of 2014, The Guardian published a story entitled: “Syria children maimed and tortured by Assad forces” based on a UN report. Did that report stir anyone to help save the Syrian children? Not really.

Did Obama consider that the biggest genocide has been perpetrated under his watch? He, Valerie Jarrett, Michelle Obama, and Denis McDonough could care less.

In Syria, the tortures increase while Barack Obama refuses to strike Assad.

Barack Obama, these helpless souls are on your conscience.

You have become a partner of terror, genocide, and the systematic and organized mass murders in Syria.