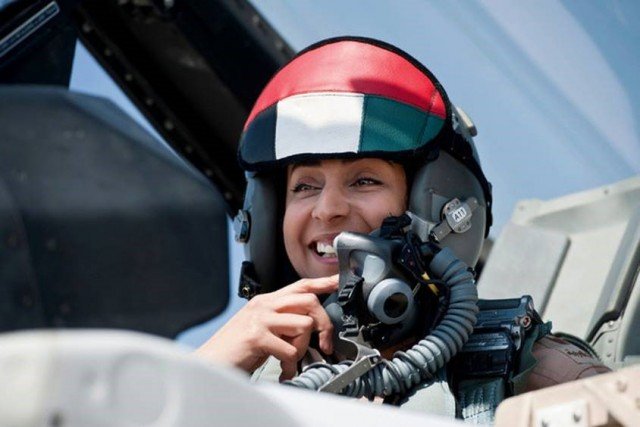 To defeat ISIL tell them a woman pilot led the bombing

September 26, 2014 4:00 am 0
Syria’s Christians Fight Back Against ISIS and Assad
ISIS Struck Back in Tunisia, France, Kuwait and Syria
For Heaven’s Sake, We Are the United States of America

Nothing and I mean nothing would irk fanatic Muslims more than to know a woman is superior in intellect, in strength of character, and in purpose to any extremist Muslim.

With that in mind, the small and liberal country of UAE stepped above the rest of the other Arab countries when it boasted the first ever woman pilot of fighter jets participating in the campaign against ISIL in Syria. For once, we can talk about extreme awesomeness coming from an Arab and a Muslim society instead of the incessant bad news of extreme Islam.

The pilot, named Maj. Mariam al-Mansouri, when telling her story, recalled that she always wanted to be a jet fighter pilot, and had to wait for the program to accept women. We are very happy UAE is blazing a gender trail that hopefully other Arab countries would emulate.

Maj. Al-Mansouri flies the advanced US F-16 fighter jets, and I believe she will be, for sure, the hero of so many young girls and women in the Middle East because they have very few heroes to look up to. .

ABC News reported about Maj. Al-Mansouri and described the circumstances that led to her career:

Born in Abu Dhabi, Mansouri is one of eight children. She told Deraa Al Watan magazine recently that her family supported her career goals, but she had to overcome gender stereotypes along the way. It likely helped that she graduated from high school with a 93 percent grade average.

New York Times reported a fascinating moment that happened during midair refueling as told by the Ambassador to UAE in Washington:

When American tanker-jet pilots contacted the flight to arrange for midair refueling, Mr. Otaiba said, they paused for about 20 seconds after hearing a woman’s voice in reply.

During those 20 seconds of silence, just imagine the pride her parents felt when told of this incident. My sense is that American Air Force personnel were silent because of shock maybe, but also because of awe.

Now consider her importance on the battlefield in Syria if ISIL extremists learn that a woman is reducing them to ashes. Some, in my estimation, would run away and others may surrender than let a woman defeat them.

To defeat ISIL tell them a woman pilot led the bombing.

To win this war quickly, the US had better start dropping leaflets in Raqqa with her picture as she makes a sortie over ISIL territory. These leaflets will save the lives of many Syrian civilians.

To defeat ISIL tell them a woman pilot led the bombing

Hallelujah! Fanatics Are Killing Each Other
The ISIS Political Football
The Ignorant Seven ISIS Helpers in the Obama Administration
Things That Matter 382