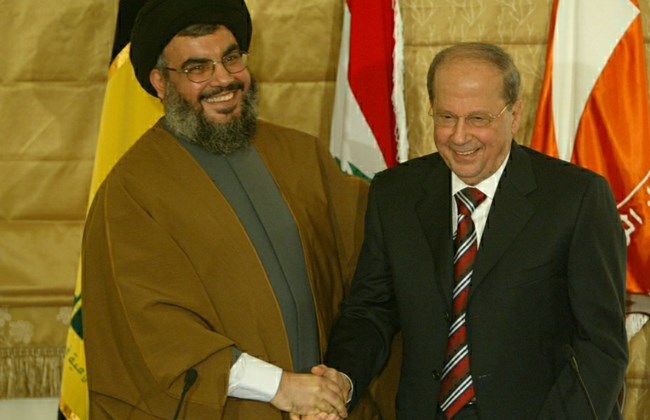 November 29, 2019 7:39 pm 0
Trump Should Protect the US Embassy in Lebanon
Conditional Aid to Lebanon Is a Golden Opportunity
The Lebanese Are In Disbelief Over The UN Hariri Verdict

Forget what you think you know about the President of Lebanon. This is the real story about the terrible Michel Aoun that you don’t know, and who today presides over all the troubles and corruption in Lebanon.

Michel Aoun made his name by standing-up militarily to Syrian occupation of Lebanon. Today, he is Hezbollah and Assad most ardent backer. How did a man go from the heroic action of attempting to liberate his country from the Syrian army occupation to becoming the one backing, directing, and producing such foreign occupation. Not only by Syria, but by Iran as well.

This is not a tale one learns at Ethics 101 in college.

Aoun declared a “War of Liberation” against Syrian army forces on 14 March 1989. On 13 October 1990, the Syrian forces invaded Aoun strongholds including the presidential palace in Baabda, killing hundreds of Lebanese soldiers and civilians. Aoun fled to the French Embassy in Beirut, and was later granted asylum in France where he lived in exile for 15 years from 1990 to 2005.

Where he lived in France and who helped him cross the bridge of treachery matters. As well as how it happened and the mysterious circumstances behind Aoun flipping to the other side.

Aoun initially lived in a sumptuous villa some 40kms east of Paris near Disneyland. Later, he moved to a large apartment in Paris 16th district also owned by the same Christian Orthodox Lebanese patron. In 2005, Aoun, with help from his patron, began secret negotiations with Hezbollah to return to Lebanon. Not as the champion of free Lebanon, but as the traitor permitting now two foreign powers to occupy his country.

Ironically, he called his political movement the Free Patriotic Movement. The name is contrarian to his deeds and actions. Because of his acrobatic move, Lebanon today is hostage to both Syria and Iran. His movement is anything but free and patriotic.

Stories surfaced after he flipped that the Qataris played an instrumental role to help Aoun make peace with Hezbollah and Assad.

When the opportunity presented itself to Qatar that Aoun might abandon the natural alliance he achieved with Saudi Arabia by combating the Assad regime, the Emir could not resist another Saudi eye poke. To the detriment of Lebanon, whose signs of slow economic death are before our eyes, Michel Aoun wanted a “price” to flip, and the Qataris helped achieve it by paying him $23m.

The number is a rumor, but the payment is not. This is the terrible Michel Aoun that you don’t know. Corrupt to the tilt. A walking ATM machine with deposits-only window.

For $23m, Aoun sold his soul to the same people who destroyed his country through occupation and violence.

AOUN IS A CATCH

Why is Aoun a catch for Iran and Assad? Because he is a Maronite Christian ordained constitutionally to run for President of Lebanon. The Assad family, backed by the Orthodox Church (i.e. Russia, Egypt Copts, etc…), killed two Maronite Catholic Christian Lebanese presidents because they would not submit to its will.

With Aoun, the evil axis of Iran, Syria, and Hezbollah can now own Lebanon. In return for Backshish for Aoun.

Incidentally, if you want to define the Emir of Qatar with regard to his relations with the Saudis, think of the north and south pole of a magnet. The Qataris will always do the opposite of what the Saudis might do. You can bet on the sun rising in the west before betting on the Qataris getting along with their distant cousins to their west.

No one really knows how much Aoun is worth or how much he pilfered using his office to bring Lebanon down to its economic knees. But it is almost a certainty that Michel Aoun has driven the country to economic collapse by adding his number to the rotating corrupt politicians waiting for their next chunk of cash.

Every foreign payment, every aid, and every dollar that enters the Lebanese Treasury is immediately earmarked for spending on contracts each Lebanese politician stands in line for his turn to purloin and pinch. And since Michel Aoun is the President, his stake and his take tops them all.

Lebanon is in a terrible economic shape today mainly because of people like Michel Aoun. Instead of steering this Mediterranean gem in the right direction, his corruption just added fuel to the smoldering fire. The worst part is that Aoun is standing by Hezbollah in his refusal to fix the problems facing the country.

Is it because he has not embezzled enough, or is it because his loyalty is to an entity that takes orders from a foreign country? We will let our readers be the judge of that.