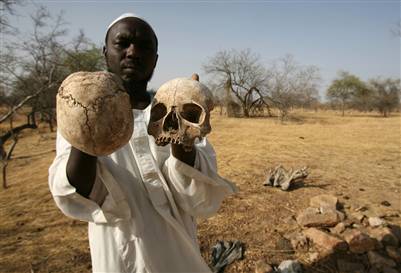 Although membership in the Arab League is based on whether one is a tyrant or not, there are two different abhorrent type of Arab rulers in the Middle East.

The violent ones capable of killing their own people. Muammar Qaddafi of Libya, Saddam Hussein of Iraq, Hosni Mubarak of Egypt, Zein el-Abedin Ben Ali of Tunisia, Omar al-Bachir of Sudan, and the crown jewel, Baschar al-Assad of Syria, represent the best examples.

Two died at the hands of their own people, one is under trial, one is protected by the Arab League even though he has murdered 300,000 innocent Sudanese in Darfur (In the Arab League, if an Arab kills his people, it’s OK. Too many of us anyway. Unless he threatens the rule of the members), and the last one, Assad of Syria, with an unknown fate but pointing to as ugly a death as that of Qaddafi or Saddam.

Then we have the protectors of violent rulers who welcome them in their own homes. And no one plays better this role than the countries of Saudi Arabia and Qatar, the Dr. Jekyll and Mr. Hide of the Middle East.

Qatar was the first country to welcome Bachir of Sudan after he was indicted for crimes against humanity. Maybe Qatar’s ruler limit is 300,000 or less people killed before he rolls his red carpet. Who knows?

Had Mubarak accepted to leave Egypt voluntarily, he would be living in some desert oasis in Saudi Arabia today.

On the surface the Arab League looks like a respected organization that world leaders take into account, but every Arab and Muslim who has lived in the Middle East understands its real role and its history of shameful acts.

If one is to look for answers to the senseless killing taking place during this Arab Spring, one has to seek the question every ruler asks himself:

How high is my chance to get away with killing my own people if I take into consideration that Bachir and Ben Ali have managed to evade the scrutiny of the Hague Courts and live to laugh about it?

He follows with this reasoning:

I can strike a deal the last minute and find a refuge in Saudi Arabia or Qatar. And if Bachir can survive with 300,000 dead on his conscious, then I have a pretty good chance of surviving with at least five tenths the number.

That’s why they kill. Bachir of Sudan is their glass ceiling.

They can, if they play it right, get away with it.

For Assad, he is relying on the Stalinists (Through acts and not ideology) in the Russian Government to save his skin. The way the Chinese Government saved Bachir of Sudan.

But as the Assad regime crumbles, the international community is responsible to keep its eyes on the ball.

Arabs still have many more countries to save from the jaws of the Ali Babas we neither elected nor chose to rule over us.

If the international community wants to avoid the pressure massive killings create, it must set the tone for the future by making sure no ruler, Arab or otherwise, is given sanctuary if he commits crimes against humanity.

Not in Saudi Arabia and not in any country on this planet, and certainly not to stay in power like Bachir does.

The same UN Human Rights Council that elects Syria and Iran to become honorable members of the Council should, to have the slightest credibility, seek a unilateral agreement by all members forbidding any country to give refuge to any leader who committed crimes against his own people.

Let’s see how many will vote against this Resolution when their leftist tendencies demand that their domestic policies take center stage instead of policing the world.

That’s not too much to ask from a Body whose name supposedly spells its mission.

We need to send as clear a signal as possible that if you kill, we will pursue you until you pay the highest price possible.

Otherwise, the Syrian scenario will be repeated (Mainly because we let Bachir off the hook) and the pressure to mount military operations against rogue rulers in far away countries become a routine during these tough and unpredictable times.

I propose we start with Baschar al-Assad. His demise will be heard across the world by every strongman, despot, tyrant, and violator of human rights.

If we don’t, NATO may find itself under pressure to move its HQ from Leopold III Boulevard to Mohammad I highway.