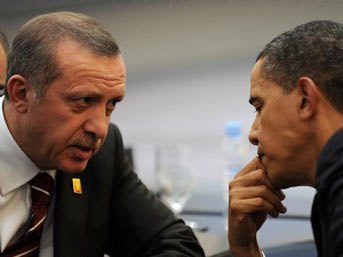 Hard to Believe: Did Obama Tell Erdogan “We Will Defend Turkey Before We Defend Israel”?

November 27, 2011 9:10 am 1
How Assad Uses the Syrian Fleet?
Is Assad Attempting to Recruit European Christians to Fight His War?
How Jihadists Slip Through Europe’s Dragnet and Into Syria

Two days ago, I heard from a very well connected Turkish friend who told me something worth writing about.

He said “There is an exuberant atmosphere of narcissism rampant amongst the close advisors of Erdogan. They all believe if Turkey attacked Israel, the United States will stand by Turkey”.Â Â

Is it possible the knowledge these close Erdogan advisors have is the result of President Obama, our US Commander-in-Chief,Â giving them that impression? Why this is of importance to someone like me has to do with how this administration has outsourced its foreign policy in the region to Erdogan, which is directly affecting the future of my native country of Syria in a negative way.Â

US-Turkish relations have evolved ever since the Second Cairo Conference in 1943 when Roosevelt and Churchill met with Turkish PresidentÂ Ä°nÃ¶nÃ¼ to discuss Turkish pro-Allies position during WWII. Later, it resulted in the Truman Doctrine of 1947 whose aim was to protect both Turkey and Greece from Soviet demands to install military bases in Turkey.

Barring the Turkish invasion of Cyprus in 1974, the US-Turkish relations have been quite solid as demonstrated by the pre-Erdogan Turkish support for the War on Terror.

Turkey is a great nation that should be commended for adopting secularism and liberalism during the post-Ottoman era of Ataturk.

But Turkey is heading in the wrong direction ever since Erdogan ascended to power. Suddenly, next to itsÂ  wisdom teeth, Turkey grew molars able to chew the region into submissive Muslims the way envisaged by every extremist that passed through these ancient lands.

As far as Israel is concerned, the US has such close relationship with the country that it matches, and sometimes, stands above the US-British umbilical ties.Â Because the US is a country founded on religion and embracing the Judeo-Christian beliefs, Israel enjoys a special place in the hearts of the American people and every US administration since 1948.

If what was told to me is true, and there is no reason to doubt the sincerity and access of my friend, never did the United States favor any other Middle Eastern country over Israel. This explains fully the support the Obama Administration is giving the Islamists. It’s an indirect way for Obama to look the other way while Syria, Egypt, Libya, Tunisia, and the traditional close allies of the US sweat bullets having to deal with the Muslim Brotherhood.

And if you have any doubt about what the MB will do once installed in Syria courtesy of Erdogan, just read, in Arabic preferably, the public comments made by the MB in Egypt (I feel for the Egyptian Copts during these trying times) or Libya today. And please, no “for public consumption” argument. Many amongst us are not convinced, especially when those haters could care less about their public.

We have a say in Arabic that goesÂ  “A cooking pan found its cover” orÂ Tanjarah La’et Qataha, which is another way of saying “They are a perfect fit”. Â

Is it possible the Islamist Erdogan is the cooking pan frying the region and Obama is covering for him. I truly find this hard to believe.Â

Everyone knows where I stand on the country of Israel. Not out of love but out of necessity to build a Syria with a brighter future and respect for what this small nation accomplished. It is also out of a logical foreign policy of pursuing peace to the four corners of the world before engaging in war.Â

On the opposite side of the spectrum is my not-so-shy discord with the Muslim Brotherhood and its backward agenda to use religion to perpetuate its rule as a political entity. If Obama is supporting Erdogan’s pro-Muslim Brotherhood agenda to spite Israel not realizing the destruction this will cause the region, then I have to stand firm against such a policy.

This whole pro-Islamist agenda of this administration makes no sense. Why the Muslim Brotherhood when we can see before our own eyes what this organization is capable of? Unless what my Turkish friend told me is true.Â

As an American-Syrian citizen and a Muslim who will exercise his right to vote in 2012, I truly believe this must be investigated fully by the opposing candidates for its danger. It must also become a campaign issue to limit the damage this ultra-liberal administration is causing by supporting extreme religion in the Middle East. Where is the logic if not for a sinister agenda?

How Jihadists Slip Through Europe’s Dragnet and Into Syria
How Assad Uses the Syrian Fleet?
Is Assad Attempting to Recruit European Christians to Fight His War?
Syrian Revolution 1335