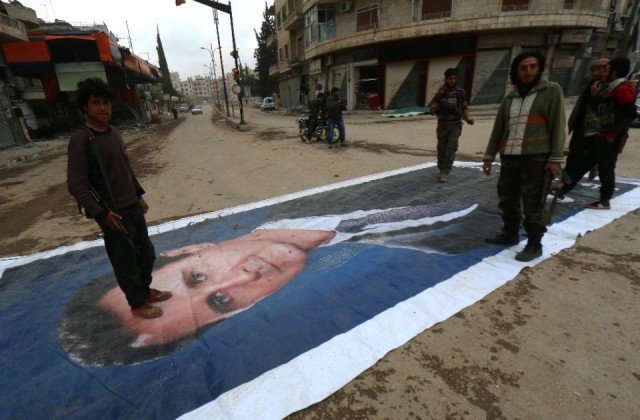 May 24, 2015 7:47 pm 0
Egyptian Freedom of Expression is a Victim of Tyranny
Trump Iran Big Blow Shows Obama How to Fight Terror
Iranian Dinner Was Annulled at the Élysée Over Wine

Weakened by years of war, Syria’s government appears ready for the country’s de facto partition, defending strategically important areas and leaving much of the country to rebels and jihadists, experts and diplomats say.

The strategy was in evidence last week with the army’s retreat from the ancient central city of Palmyra after an advance by the Islamic State group.

“It is quite understandable that the Syrian army withdraws to protect large cities where much of the population is located,” said Waddah Abded Rabbo, director of Syria’s Al-Watan newspaper, which is close to the regime.

Syria’s government labels all those fighting to oust President Bashar al-Assad “terrorists,” and has pointed to the emergence of IS and Al-Nusra as evidence that opponents of the regime are extremists.

Since the uprising against Assad began in March 2011 with peaceful protests, the government has lost more than three-quarters of the country’s territory.

But the territory the regime controls accounts for about 50 to 60 percent of the population, according to French geographer and Syria expert Fabrice Balanche.

“The government in Damascus still has an army and the support of a part of the population,” Balanche said.

“We’re heading towards an informal partition with front lines that could shift further.”

People close to the regime talk about a government retreat to “useful Syria”.

“The division of Syria is inevitable. The regime wants to control the coast, the two central cities of Hama and Homs and the capital Damascus,” one Syrian political figure close to the regime said.

“The red lines for the authorities are the Damascus-Beirut highway and the Damascus-Homs highway, as well as the coast, with cities like Latakia and Tartus,” he added, speaking on condition of anonymity. With the rebels on tne move, it is wishful thinking for the regime to draw red lines.

The coastal Latakia and Tartus provinces are strongholds of the regime, and home to much of the country’s Alawite community, the offshoot of Shiite Islam to which Assad adheres.

In the north, east and south of the country, large swathes of territory are now held by jihadists or rebel groups, and the regime’s last major offensive — in Aleppo province in February — was a failure.

For now the regime’s sole offensive movement is in Qalamun along the Lebanese border, but there its ally, Lebanon’s Shiite Hezbollah movement, is taking the lead in the fighting.

“The Syrian army today has become a Praetorian guard that is charged with protecting the regime,” said a diplomat who goes to Damascus regularly.

He said the situation had left Syrian officials “worried, of course,” but that they remained convinced that key regime allies Russia and Iran would not let the government collapse.

Some observers believe the defensive posture was the suggestion of Iran, which believes it is better to have less territory but be able to keep it secure.

The shift may also be the result of the dwindling forces available to the regime, which has seen its once 300,000-strong army “whittled away” by combat and attrition, according to Aram Nerguizian, a senior fellow at the US Center for Strategic and International Studies.

“On the surface, the regime appears to have accepted that it must secure, hold and defend its core area of control… with its current mix of forces,” he said.

Those are approximately 175,000 men from the army, pro-regime Syrian militias and foreign fighters including from Hezbollah and elsewhere.

Thomas Pierret, a Syria expert at the University of Edinburgh, said that to survive, “the regime will have to lower its expectations and concentrate on the Damascus-Homs-coast axes.

“Militarily, the regime probably still has the means to hold the southeastern half of the country long-term, but further losses could weaken it from within.”