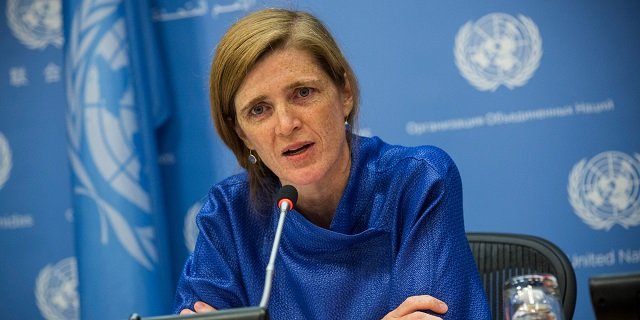 February 10, 2016 6:52 pm 0
Assad to Syrians is what AQ is to America
Syrian Opposition to Post Dead Detainees’ Photos
Barack Houdini Atrocities Prevention Board

Several United Nations Security Council members pressed Russia on Wednesday to stop bombing around Syria’s Aleppo in support of a Syrian military offensive and allow humanitarian access ahead of a crucial meeting of major powers in Germany on the conflict. Notice Samantha Power absence from this discussion probably due to instructions from Barack Obama not to cross Russia even when Putin is causing human tragedies of gargantuan proportions. The first black US president has the blackest of hearts.

Anyone doubts Putin and Obama have an understanding that Russia should take over the Middle East just for one reason: The US will never have to go to war to protect its allies ever again? That task has been outsourced to Russia by Barack Obama.

The 15-member Security Council met behind closed doors to discuss the situation after the U.N. warned that hundreds of thousands of civilians could be cut off from food if Syrian government forces encircle rebel-held parts of Aleppo.

“Russia’s air strikes have been a direct cause of this crisis around Aleppo.”

International powers, including Russia, the United States, Saudi Arabia and Iran, are due to meet on Thursday in Munich in a bid to resurrect Syrian peace talks. But diplomats have little hope for negotiations as long as the Russian-backed offensive continues. Rebels say they will not attend unless the bombing stops.

“The (Syrian) regime and its allies cannot pretend they are extending a hand to the opposition while with their other hand they are trying to destroy them.”

Russian U.N. Ambassador Vitaly Churkin said Russian air strikes were being undertaken in a “transparent manner.” He said some Security Council members has “crossed the line” by politically exploiting humanitarian issues. Killing civilians is considered an exploitation by those condemning Russia, but the Soviet habit of killing civilians it tasted during World War II and which has never stopped ever since even against its own people seems normal by Putin’s standards.

“They rather crudely use humanitarian matters in order to play, we believe, a destructive role as far as the political process is concerned,” said Churkin, adding that given the heightened interest in humanitarian issues, the council should also start regularly discussing Yemen and Libya.

New Zealand’s van Bohemen described the situation in Aleppo as the “most dramatic and devastating situation within the council right now” and said he was not impressed with Churkin’s attempt “to divert attention from that.”

Britain’s U.N. Ambassador Matthew Rycroft said he hoped Russia would present “concrete ideas” at the Munich meeting that would lead to a ceasefire in Syria and humanitarian aid access. Notice Samantha Power absence from this discussion.

Syria’s five-year civil war has taken up to 300,000 lives and driven about 11 million people from their homes.