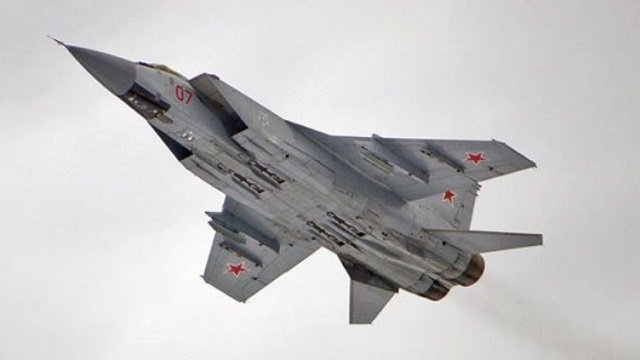 August 17, 2015 5:09 pm 0
Russia Will Turn Syria Into Another Afghanistan
Over a Billion Sunnis Should Economically Isolate Russia
Russia accused of ‘weaponizing’ Syria refugees

The Syrian government has received six MiG-31 ‘Foxhound’ interceptor aircraft from Russia under a deal that was said to have been signed in 2007, a regional media source has reported.

The aircraft recently arrived at Mezze Airbase on the outskirts of Damascus, the Turkish BGN News agency reported on 16 August.

Syria was reported to have ordered eight MiG-31 combat aircraft as part of a wider defence deal with Russia in 2007. Although this deal was confirmed at the time by the head of the United Aircraft Corporation (UAC), Alexei Fyodorov, it was later denied by Anatoly Isaykin, director of state arms export bureau Rosoboronexport, who in 2010 described the sale as “a journalistic hoax”. Neither the Russian nor the Syrian authorities have so far commented publicly on the reported deliveries.

The MiG-31 first entered Soviet service in the early 1980s as a long-range, high-altitude, and high-speed interceptor. Although relatively old, it is still a highly capable platform that features some of the latest sensor and weapons fits.

According to IHS Jane’s World Air Forces , Russia has approximately 200 MiG-31s in service that it is currently in the process of upgrading to keep them operational through to the 2030s. With the exception of Russia and now possibly Syria, only Kazakhstan flies the type.

Until the arrival of the MiG-31s in Damascus is confirmed, it should be treated with an element of skepticism. With the regime of Bashar al-Assad finding itself increasingly hard-pressed on the ground, it has to be noted that a state-of-the-art high-altitude interceptor is probably of limited use right now.

The delivery has been linked to Western proposals for a no-fly buffer zone to be established over Syria, but while the MiG-31s would certainly give NATO planners pause for thought, their small number and single basing location would mean that they would likely be destroyed in the early hours of any alliance effort to establish air dominance over the country ahead of implementing such a no-fly zone.

According to Air Force Captain Yasser al-Hariri, the MiG-31 interceptors story is a lie. Al-Hariri told a Syrian opposition news website that the MiG-31 Interceptor is a fighter jet whose mission is to intercept other fighter jets. The regime is using his jet fighter assets today to attack mostly civilian targets on the ground, which the Interceptor is ill-equipped to handle.

He also told the website that the Syrian Air Force Academies have not trained new pilots for the last five years. The regime has been relying on its existing pool, which is not equipped to handle the sophistication of the MiG-31 Interceptors.