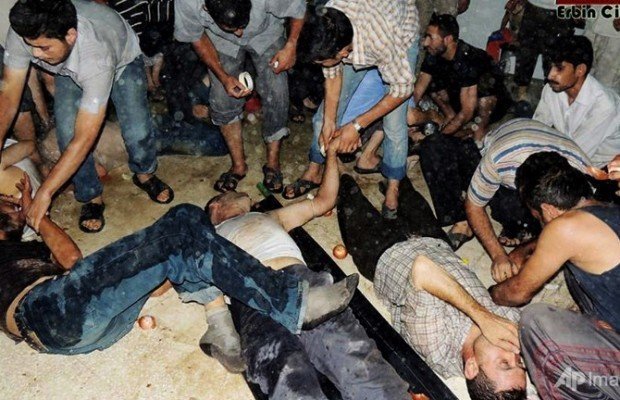 August 22, 2013 8:29 am 0
To Save the Jews, Let Hitler Win
Arabs Remain Living in the Dark Ages
It is not about domestic terror, it is about international terror

Source: The Times of Israel – by Aaron Kalman (Steinitz: Intelligence confirms Syrian use of chemical weapons)

Minister for Intelligence and Strategic Affairs Yuval Steinitz said Thursday that chemical weapons were used in the previous day’s attack in Syria that left hundreds, and according to some reports thousands, dead in the eastern suburbs of Damascus.

“According to our intelligence assesments, chemical weapons were used [in the previous day’s attack], and of course not for the first time,” Steinitz told Israel Radio.

“The international community condemns [these attacks], there are investigations… nothing practical or substantial has been done these past two years in order to stop these massacres of civilians by the Assad regime,” Steinitz said.

The minister also criticized the UN’s efforts to investigate chemical weapons attacks in Syria, calling the whole thing “a joke.”

“To investigate now the allegations of chemical weapons use half a year ago, and a year ago, without moving to check what happened yesterday? This is absurd,” claimed Steinitz.

Israel has accused Assad of deploying chemical weapons in the past and has repeatedly expressed concern that neighboring Syria’s chemical arsenal could fall into the hands of anti-Israel militants.

The UN Security Council has called for an investigation into the latest allegation of chemical weapons use.

Former defense minister Shaul Mofaz said Thursday that the international community, and especially the US, must intervene in Syria even though it is clear they don’t intend to do so.

“The whole world knows this,” he said, but the UN inspectors on the ground are limited in what they can do, and “the world will not act.”

“These days, each of the Western heads of state acts based on his interests,” Mofaz stated. “However, they have a responsibility, as protectors of the free world, to act and take steps that will deter Assad from using weapons of mass destruction — but that’s not happening.”

Assad “views the lack of response [from the West] as a weakness,” and will continue to use chemical weapons as long as he can get away with it, Mofaz said. He added that Israel would not take action against Assad, again saying the international community needed to do more.

Asked whether Israel would rather Assad be replaced or remain in power, the former defense minister said there wasn’t a clear choice, and noted that “it’s not in our hands.” There are “many terrorist organizations involved in this war” from both sides, he said, and whatever the outcome, “Israel must be prepared, it must be ready.”

On Wednesday, Defense Minister Moshe Ya’alon said the Syrian regime had used chemical weapons, and “not for the first time.”

Speaking at briefing with military reporters, Ya’alon said the civil war was “a life and death struggle between a regime representing the Alawite minority and a disunited opposition.” He warned that the end of the conflict, which has already claimed the lives of over 100,000 people, “is not yet in sight… [even] the fall of Assad would not end this conflict.”

On Wednesday, Ya’alon spoke with US Secretary of Chuck Hagel to discuss developments in Syria and Egypt, according to statements issued by both of their offices.

The conversation was part of ongoing discussions between the parties, Ya’alon’s office said.

The men “agreed to continue to maintain intensive dialogue on the multitude of challenges facing” their two countries, a Pentagon statement read.