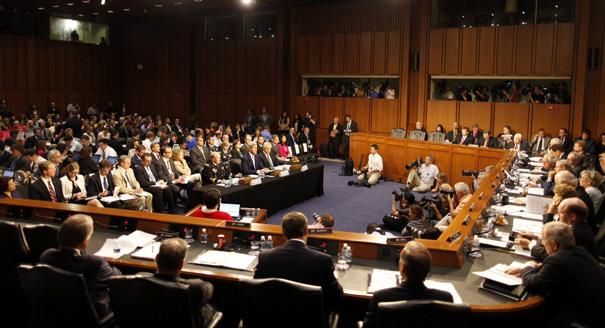 The Senate Foreign Relations Committee has approved a bill that condemns violence in Syria and calls on the State Department to report to Congress on war crimes and crimes against humanity in the country.

The bill denounces the use of chemical weapons, the targeting of civilian populations with barrel and cluster bomb and missiles and what it says are “gross human rights violations” carried out by forces loyal to Syria’s dictator Bashar Assad and violent extremist groups.

In effect, this Senate panel denounces Assad crimes against humanity and those committed by other violent groups, which are dwarfed by the Assad crimes.

A Britain-based human rights group says at least 230,000 people have died since the conflict began in March 2011. Other reliable Syrian rebel sources peg the number at 300,000 killed in the Syrian conflict.

The bill, introduced by Democratic Sens. Ben Cardin of Maryland and Bob Menendez of New Jersey and Republican Sen. Marco Rubio of Florida, passed Tuesday on a voice vote in the committee.

Despite U.N. warnings, the Assad regime has increased the number of incidents in which chlorine gas and barrel bombs use has become a routine. Over the last month, close to 200 people have died from Assad’s barrel bombs in Aleppo.

President Barack Obama has been mostly silent on this issue. He is hoping his Iran deal will make the world forget the atrocities committed by the Assad regime, and which he ignored.

AP contribute to this report.