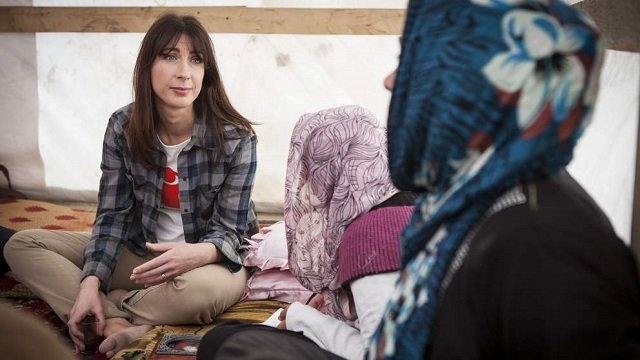 July 15, 2013 8:39 am 0
Daft as a Brush
Where Are the Sanctions Against Russia for Invading Syria?
Obama’s Syrian foreign policy is crumbling

David Cameron’s wife is privately pushing him to do more to tackle the Syrian conflict, it has been claimed.

Senior government figures say Samantha Cameron is the “biggest explanation” for his hawkish stance on the conflict, The Times reports.

She has pushed for a tough response to the humanitarian crisis after travelling to the region in her role as a charity envoy, sources close to the Prime Minister were cited as saying.

Mrs Cameron visited a Lebanon refugee camp with Save The Children in March.

She met a 10-year-old girl whose mother had been killed when a shell destroyed the family home.

She also heard from a mother-of-six whose son had been shot by a sniper.

“No child should ever experience what they have,” she said at the time.

“With every day that passes, more children and parents are being killed, more innocent childhoods are being smashed to pieces.”

But while his wife is privately pushing for more action, military chiefs reportedly told Mr Cameron last month that providing arms to the rebels would not alter the balance of forces on the ground.

He was also warned that destroying Syrian air defences would be a big undertaking and could drag British forces into all-out war with the Assad regime.

Officially, the option of arming the rebels remains on the table, although William Hague, the Foreign Secretary, has given an assurance that no weapons would be sent without a Commons vote.

Former foreign secretary David Miliband said on Sunday the “time had passed” for arming the rebels and that the conflict was heading for a stalemate.

The Prime Minister’s spokesman stressed that policy on Syria was a matter for the National Security Council.

“I would proceed with a fair bit of caution on this one,” he said. “The Government’s approach to Syria is driven through the National Security Council. That is where our policy and approach is driven.”

He acknowledged, however, that Mrs Cameron had been affected by her visit to the camp.

“Mrs Cameron travelled herself to the region where she saw the horrifying effects of the conflict on the children she saw in the refugee camps,” the spokesman said.