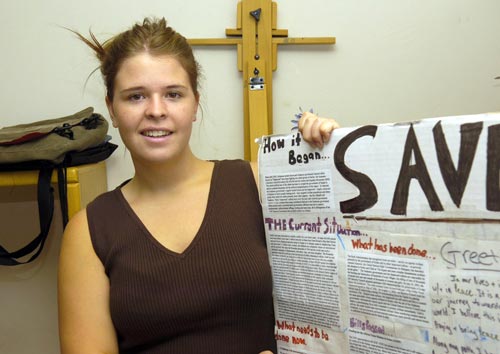 Kayla Mueller was a 25-year old American aid worker who took it upon herself to go help the Syrian people. First in Turkey, then she entered Syria to see the tragedy of Aleppo only to be kidnapped the next day. She died while being held hostage by ISIS and as far as I am concerned ISIS is responsible for her death regardless of what exactly happened to cause her death.

Kayla is not the last American that was held in Syria. Austin Tice remains a prisoner of the Assad regime, something the Obama administration is trying to muzzle in order not to attract too much attention upon Obama’s coordination with the Assad regime.

Kayla’s parents, Carl and Marsha Mueller, released this statement from their home in Arizona:

“We are heartbroken to share that we’ve received confirmation that Kayla Jean Mueller, has lost her life, we are so proud of the person Kayla was and the work that she did while she was here with us. She lived with purpose.”

You should be so proud of her. When most people her age are Facebooking about trivialities, Saint Kayla Mueller Facebooked about human tragedies she experienced first-hand. Here is a video of her early-on describing her compassion for the Syrian people.

“Because silence is participation”

Maybe that message was addressed to Barack Obama who tried everything humanly possible to keep Syria out of our conscience because he refused to get involved or lead on the world stage. Kayla led with her courage and her love to help others in need. For that she paid the ultimate price that no parents wish upon any other.

Our condolences go out to the family of Saint Kayla Mueller. We stand by you during these hard times.

Thank you Kayla. No Syrian refugee you touched with your love and compassion will ever forget you.