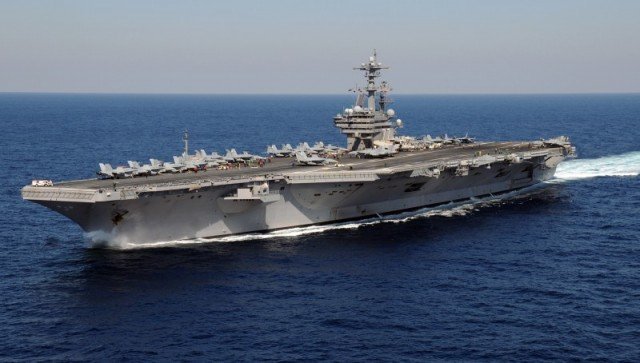 August 8, 2014 4:19 pm 0
Russia Applying and Obama learning from .. Obama
The Terror Maestro Meets His Waterloo
Islamism is Not the Answer

My Note: Because Obama is not bombing Assad of Syria who has committed atrocities deemed for a war crime tribunal at the same time he is bombing ISIS also committing atrocious crimes, this will be viewed in the Arab Sunni world as a US-led anti-Sunni campaign. Obama may have just opened the gates of hell against America with this one sided air campaign. Exactly what Putin, Khamenei, and Assad want Obama to do to harm America. Boneheaded move by Obama.?

WASHINGTON ? U.S. warplanes made a second wave of airstrikes Friday in northern Iraq against the militants who have besieged a religious group and threatened the city of Irbil, a Pentagon official said.

Strikes could continue through the weekend, Kirby said. Humanitarian-aid drops will continue as well.

The jets for both strikes came from the USS?George H.W. Bush, an aircraft carrier operating in the Persian Gulf, according to a Defense Department official who spoke on condition of anonymity to discuss sensitive military details.

President Obama said Thursday night that airstrikes would be used if the militants threatened Irbil, home to a U.S. consulate and a joint U.S.-Iraqi operations center.

“As the president made clear, the United States military will continue to take direct action against ISIL (Islamic State of Iraq and the Levant) when they threaten our personnel and facilities,” Rear Adm. John Kirby said in a statement.

Obama’s objectives are “protection of American personnel in Iraq,” Earnest said, and answering the “urgent humanitarian situation at Sinjar Mountain,” where members of an Iraqi religious minority, the Yazidis, are seeking refuge.

Hundreds of Yazidi women have been taken captive by ISIS members, the spokesman for Iraq’s human rights ministry said Friday. Kamil Amin said the women are below the age of 35 and some are being held in schools in Iraq’s second largest city, Mosul. He said the ministry learned of the captives from their families.

Earnest said the U.S. mission against ISIS will not involve combat troops and will focus on helping improve Iraq forces so that they can take the lead in the fight against the militants.

The administration had developed the Iraq plan for some time, Earnest said, and that Obama discussed Iraq and ISIS with House and Senate leaders in a mid-June meeting

Obama, congressional leaders and members of key committees also discussed Iraq at a meeting eight days ago, Earnest said. “We certainly welcome the partnership and support” of lawmakers, he said, adding that the White House contacted key leaders Thursday before the announcement of the strikes.

The administration has no plans to seek additional appropriations for the Iraq operation, Earnest said. The administration will maintain congressional consultations, and make notifications as required under the War Powers Resolution, he said.

Earnest said the plan will be evaluated regularly, and assessed based on conditions on the ground.

“The president has not laid out a specific end date,” Earnest said.

Obama has been briefed by national security aides throughout the day, Earnest said. In the morning, he spoke on the telephone with Jordan’s King Abdullah, a longtime U.S. ally.

There are about 650 U.S. troops in Iraq ? 470 of them to protect American personnel and property at the embassy and Baghdad International Airport. The remainder are there to assess the security situation in Iraq and assist Iraqi forces in dealing with the threat from Islamic extremists who have captured key cities.

The Pentagon also has dispatched Apache attack helicopters and surveillance aircraft to the airport. The drones and other manned spy planes have been flying dozens of missions daily.

Meanwhile, the Federal Aviation Administration announced Friday that it is banning U.S. airlines and commercial carriers from flying in Iraqi airspace.