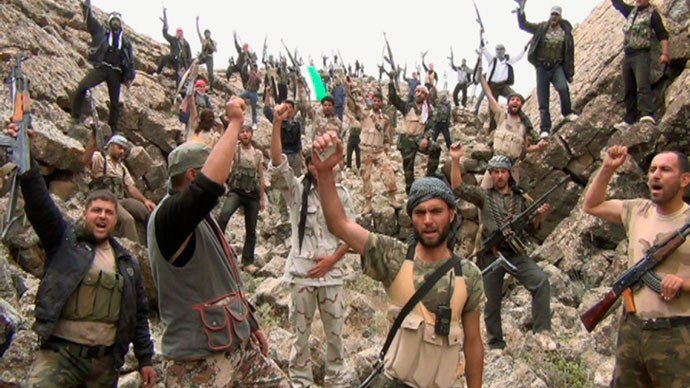 Syrian Islamist rebels have killed around 200 people in a three-day offensive in the mountain stronghold of the psychopath Baschar al-Assad’s Alawite sect and driven hundreds of villagers to seek refuge on the Mediterranean coast.

Since launching the surprise assault at dawn on Sunday, the mainly Islamist rebel brigades led by two al Qaeda-linked groups have captured half a dozen villages on the northern edges of the Alawite mountain range, the activists say.

The rebel strike into Alawite territory and their capture of a military airport north of Aleppo mark two major gains for Assad’s foes after months of setbacks during which they lost ground around the capital Damascus and the central city of Homs.

Combined with a steady fightback in the southern province of Deraa, they highlight the challenge Assad faces in trying to restore his authority across Syria after two years of conflict that has killed 100,000 people and fragmented the country.

Assad controls much of southern and central Syria, while rebels hold northern areas near the Turkish border and along the Euphrates valley towards Iraq. The northeast corner is now an increasingly autonomous Kurdish region.

Rebels complain they are outgunned and lack foreign support, unlike the Iran- and Hezbollah-backed Syrian army. But they have support from regional Sunni powers and have equipped themselves with anti-tank weapons seized from the army.

Syrian state television said on Tuesday at least two Alawite villages seized by rebels since Sunday had been recaptured and named 10 “terrorists” – as the authorities call the rebel fighters in Syria – it said were killed in the fighting.

Overall, 60 rebels have been killed since the start of the operation, said Ammar Hassan, a local activist in Latakia. “Assad is sending huge reinforcement from Latakia, but liberation will continue,” he said.

Assad’s deployment of extra forces reflects the gravity of the challenge to his authority in a region that had remained firmly under his authority since the outbreak of Syria’s conflict, which started with peaceful protests in March 2011.

The conflict has turned into a civil war, deepening the Shi’ite-Sunni schism in Islam and raising tensions between Iran and the rest of the mainly Sunni Middle East.

Diplomats say the coastal area and its mountain villages could be the scene of an Alawite bloodbath if Islamist hardliners eventually gain the upper hand in the conflict.

“We killed 200 (of Assad’s men) on Sunday alone, and yesterday at least 40,” said a rebel fighter in the area.

“His people were kicked out to the city,” he said referring to the Mediterranean port of Latakia. “Only those who raised the white flag were exempt from killing.”

Ahmad Abdelqader, an activist with the Ahrar al-Jabal Brigade, one of the groups involved in the operation, put the death toll at 175, describing them as soldiers and militiamen who were manning roadblocks linking the mountain villages.

A prominent Alawite cleric, Muwaffaq Ghazal, was also seized by rebels from the al Qaeda-linked Nusra Front, who were seeking an exchange for captured fighters, activists said.

Mohammad Moussa, a Free Syrian Army commander, said rebel forces were on the outskirts of the hilltop village of Aramo, which is 20 km (12 miles) from Qardaha – Assad’s hometown and burial place of his father, Hafez al-Assad, who ruled Syria with an iron fist for three decades.

“The objective is to reach Qardaha and hurt them like they are hurting us. The Alawites have been huddling in their mountain thinking that they can destroy Syria and remain immune,” Abdelqader said.

In another gain for the rebels, Islamist fighters in the north of the country took control of Minnig military airport after months of conflict, consolidating rebel control over a key supply route from Turkey into Aleppo.

The opposition Syrian National Coalition announced the “full liberation of the airport”, saying its capture “will have a strategic effect on the course of battle throughout the north”.

A statement issued by nine brigades that took part in the operation, including the al Qaeda-linked Islamic State of Iraq and the Levant (ISIL), said: “The airport has been fully liberated. The remnants of the Assad gangs are now being chased.”

The command headquarters, the last section still held by Assad’s troops, was overrun on Monday by ISIL rebels after a suicide bomber drove an armoured personnel carrier packed with explosives into the building.

Charles Lister of Jane’s Terrorism and Insurgency Centre said the fall of the airport “underlines the leading strategic impact being played by militant Islamists, particularly in northern Syria”.

He said it will also likely prove a turning point within the wider conflict in Aleppo province. Assad’s forces still control part of Aleppo city, the country’s former commercial hub, but most of the rural land around it is rebel-held.

Activists said Minnig had not been used as an airport for several months as rebel fighters gradually took it over, capturing 15 soldiers during the final push on the facility in the last two days.

Syrian state media said fighting continued in the area. “Our armed forces heroes in the Minnig Airport and the surrounding area are confronting the terrorist with unmatched valour. The terrorist groups are taking heavy losses,” a statement said.

Assad’s forces tried to prevent the fall of the airport by launching an armoured offensive from Aleppo last month, backed by guerrillas based in the two Shi’ite villages, al-Nubbul and Zahra.