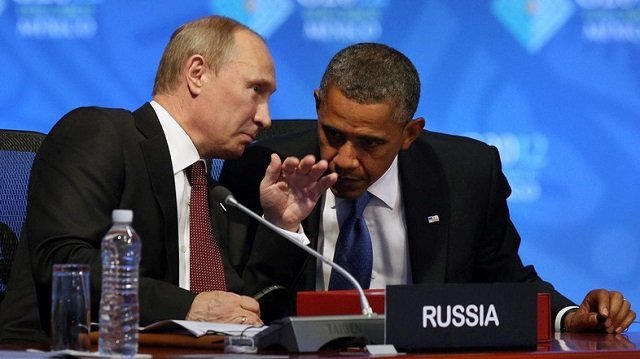 Kremlin spokesman Dmitry Peskov said on Tuesday that dialogue between Moscow and Washington on solving the Syria crisis was indispensable. Why now? Because Putin knows how easy it is to outmaneuver Obama at every level.

Peskov made the comments when asked whether talks on Syria were possible between Russian President Vladimir Putin and U.S. President Barack Obama.

However, Putin also said on Tuesday that it’s impossible to defeat the extremists from the Islamic State of Iraq and Syria (ISIS) group without cooperating with the Syrian government. The same government that forged ISIS just so Putin says what he said.

Speaking on Tuesday at a meeting of a Moscow-dominated security alliance of ex-Soviet nations in Tajikistan, Putin said that Moscow has provided military assistance to Assad’s government and will continue to do so.

He shrugged off allegations that Moscow’s support for Assad has sparked a flow of refugees, saying in a televised statement that without Russia’s support for Assad’s regime the number of Syrian refugees heading to Europe would have even bigger. Putin did not explain how.

In seeking a dialogue now, Putin knows he can outmaneuver and outsmart Barack Obama on Syria. He also knows that Obama is a master spinner, which means whatever horrific deal he strikes with Obama against U.S. interests, Barack Obama would be able to sell it to the American people as dripping honey.

The U.S. says that Russia is in the midst of a steady military buildup at a Syrian airport, indicating Moscow intends to create an air operations base there, although no fighter jets or helicopters have arrived yet.

The Dealers of Hope
Why does the Iran Deal make Obama look stupid?
Obama on Iran and Syria: See No Evil
Slippery Barack Obama 964