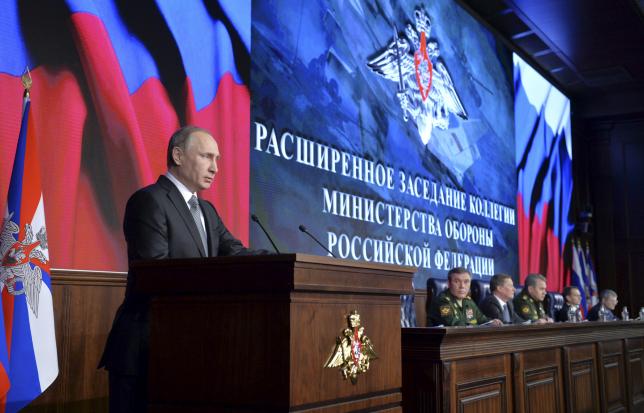 Putin Is Instigating ISIS to Battle The Moderates

It is not enough that most of Putin’s air strikes have failed to weaken the moderates fighting the Assad regime, Putin is instigating ISIS to battle the moderates on his behalf now.

On Friday, he said that Russia supports the opposition Free Syrian Army, providing it with air support, arms and ammunition in joint operations with Syrian troops against Islamist militants.

Putin is instigating ISIS to battle the moderates on his behalf because he could not defeat them on the battlefields.

Western and Arab states carrying out air strikes against Islamic State for more than a year say that Russian jets have mainly hit other rebel forces in the west of Syria.

“The work of our aviation group assists in uniting the efforts of government troops and the Free Syrian Army,” Putin told an annual meeting at the defense ministry.

“Now several of its units numbering over 5,000 troops are engaged in offensive actions against terrorists, alongside regular forces, in the provinces of Homs, Hama, Aleppo and Raqqa,” he said, referring to the Free Syrian Army.

“We support it from the air, as well as the Syrian army, we assist them with weapons, ammunition and provide material support.”

The Free Syrian Army has denied, in the past, any visits to Moscow or coordination with Russia.

Defence Minister Sergei Shoigu said, however, that the influence of Islamic State was increasing in Syria, where militants control around 70 percent of the country. One more reason for Putin’s action. Putin is instigating ISIS to battle the moderates.

The number of IS fighters in Iraq and Syria totals around 60,000, Shoigu said, and there is a threat of violence spilling over into post-Soviet Central Asia and the Caucasus.

Putin Is Instigating ISIS to Battle The Moderates

UK Foreign Secretary and French Foreign Minister: Assad cannot be Syria’s future
Remembering James Foley
Who Are These ISIS Guys and Why Is Obama Willing to Bomb Them?
Putin Terror 436