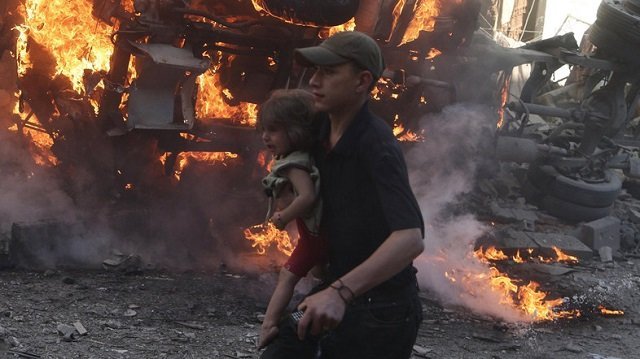 Moscow has come under increased international pressure in recent days over what Washington and Gulf states say is a Russian military build-up in Syria, where the Kremlin has been supporting Syria’s Baschar al-Assad in a four-and-a-half-year war.

“There were military supplies, they are ongoing and they will continue. They are inevitably accompanied by Russian specialists, who help to adjust the equipment, to train Syrian personnel how to use these weaponry,” Lavrov said.

Lavrov also said that Russian President Vladimir Putin, who is travelling to New York for the U.N. General Assembly meeting later this month, plans to address the assembly on the topics of Syria, the conflict in Ukraine, the state of the global economy and sanctions against Russia.

“He (Putin) will touch specific aspects, such as Syria, the Ukraine crisis. All these crises arise from systemic problems regarding attempts to freeze the process of forming polycentric world,” Lavrov said.

The United States and its allies oppose Assad, whose government has been fighting an array of insurgent groups, including hardline Sunni Islamist militants, Islamic State of Iraq and Syria (ISIS). A U.S.-led coalition is conducting air strikes on ISIS.

Moscow says its military assistance to the Syrian army is in line with international law and that Russian servicemen, including military experts, have been present inside Syria for many years, including before the start of the war.

The Syrian civil war in which around 300,000 people have died has caused nearly half Syria’s pre-war 23 million strong population to flee, with many thousands attempting to reach Europe.

Russia is under Western sanctions due to its role in a conflict in Ukraine between pro-Russian rebels and Ukrainian forces. Nonetheless, Putin could care less about weak Barack Obama.

Who Are These ISIS Guys and Why Is Obama Willing to Bomb Them?
Imagine Hitler instead of Churchill
Bashar Assad may be weaker than he thinks
Slippery Barack Obama 976