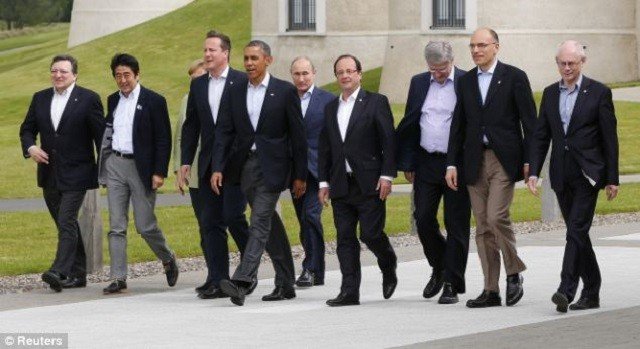 October 7, 2014 1:31 pm 0
It Matters Little If Britain Says Assad Can Stay
When Children Suffer
Where Does Israel Stand on Assad Remaining in Power?

The airstrikes and other actions President Obama is taking against Islamic State deserve bipartisan support. They are beginning to degrade the terrorist group, also known as ISIS, but will not destroy it, for one reason above all: The administration still has no effective policy to remove Bashar Assad from power and end the conflict in Syria.

Administration officials have called their approach “ISIS first.” As for Mr. Assad, in the words of Gen. Martin Dempsey, chairman of the Joint Chiefs, the administration will “defer that challenge into the future.” This is not a luxury we get to choose. And Mr. Obama himself recently said he does “recognize the contradiction” in his own policy—which is that by confronting Islamic State but not Assad, the U.S. may unintentionally benefit the ruler whose ouster he continues, rightly, to demand.

Unfortunately, this is not the only self-defeating contradiction in the administration’s Syria policy.

After Islamic State stormed into Iraq in June, Mr. Obama argued that Prime Minister Nouri al-Maliki ’s alienation of Sunnis had strengthened the terrorist group. Destroying Islamic State in Iraq, the administration suggested, required Mr. Maliki’s removal and an inclusive new government. Why not the same urgency about Syria?

Mr. Assad all but created Islamic State through his slaughter of nearly 200,000 Syrians, and he has knowingly allowed the group to grow and operate with impunity inside the country when it suits his purposes. Until we confront this reality, we can continue to degrade Islamic State in Syria, but Mr. Assad’s barbarism will continue to empower it.

This points to another contradiction: How can we arm and train 5,000 Syrians and expect them to succeed against Islamic State without protecting them (and their families) from Assad’s airstrikes and barrel bombs? Or expect moderate groups in Syria fighting Islamic State to take advantage of U.S. airstrikes if we do not coordinate or communicate our operations with them? This is reportedly not happening. Instead, Mr. Assad is exploiting U.S. airstrikes to kill the very people we want as our partners. This is not just a recipe for failure; it is immoral.

It’s unlikely that the U.S. can maintain public support among Syrians for the fight against Islamic State, or succeed without their support, unless it does more to end Assad’s war against them. Syrians are already asking why America is bombing Islamic State but not stopping Mr. Assad from bombing them. This only hardens their pervasive belief that America cares only for itself. This belief threatens to strengthen Islamic State and discredit our moderate partners among the anti-Assad forces.

There’s another shortcoming in the president’s policy. Mr. Obama has ruled out what 13 years of experience building security forces in Afghanistan and Iraq have shown is crucial for success—embedding U.S. military advisers with our foreign partners as they head into combat. These advisers help local forces with tasks they cannot yet perform, such as command and control, and enable them with the U.S. military’s unique capabilities, such as directed airstrikes, intelligence and special forces. When the U.S. took these steps in Afghanistan and Iraq, we largely succeeded. When we did not, we failed.

What’s more, airstrikes can only be partially successful without U.S. forces on the ground to direct them. Identifying targets, hitting them effectively and avoiding collateral damage is significantly harder when done exclusively from the air.

The greatest contradiction of Mr. Obama’s military intervention in Syria is that it appears unconnected to his political goal: a “transition” from Assad to an inclusive, sustainable political order. This goal will require the U.S. to militarily degrade the Assad regime, upgrade the moderate opposition, change the momentum of the conflict and create conditions for a political solution.

At a minimum, this means a larger role for U.S. military advisers and forward air controllers. It also means declaring safe zones in Syria and telling Mr. Assad that if his forces and aircraft operate there, they will be targeted like Islamic State. Key regional partners realize that we must confront Mr. Assad as well as Islamic State, and they are willing to join America in doing so.

These would not be minor military operations, and we sympathize with the president’s reluctance to get more involved in the Syrian conflict. But for three years, this reluctance has allowed the conflict to become dramatically worse, and now, with the rise of Islamic State, more directly threatening to the United States. This has compelled Mr. Obama to take nearly every military action that he once disparaged and ruled out. Unfortunately, this gradual U.S. escalation has consistently been a day late and a dollar short.

The reality is that defeating Islamic State also requires defeating Bashar Assad. Avoiding this reality, as Mr. Obama still tries to do, will only postpone the problem at growing risk to Syrian lives and American security. And when Syria deteriorates further, as it surely will, the U.S. will be compelled to respond once again, but our options will be fewer, worse and costlier.

Messrs. McCain and Graham are Republican senators from, respectively, Arizona and South Carolina.