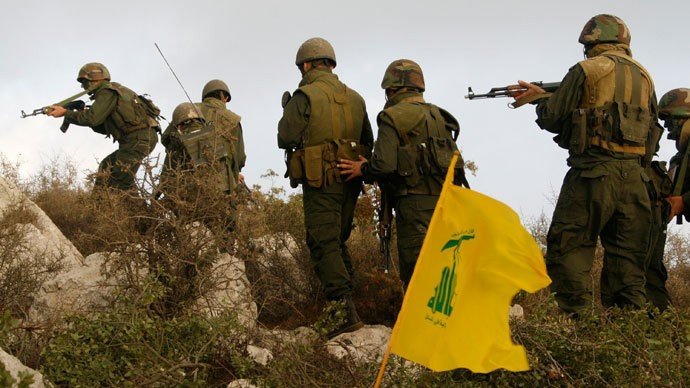 February 12, 2015 3:15 am 0
French president calls Paris attacks ‘act of war’ by IS
Syria is the New Israel. Syrians the New Palestinians.
The Crisis of ISIS

By Kareem Shaheen – The Guardian

Hezbollah fighters battling alongside the Assad regime gained ground in a new offensive in one of the last strongholds of moderate rebels in southern Syria – an advance that is likely to alarm Israeli leaders.

The fresh assault came as a top US intelligence official warned of an “unprecedented” influx of 20,000 foreign fighters into Syria from over 90 countries, the majority of whom are looking to fight alongside the Islamic State and who pose a risk to their home countries upon their return.

The Syrian military confirmed that it began a “broad operation” in the south that had led to advances in the rural areas south-west of Damascus , to the cities of Quneitra and Daraa, regaining control of a number of towns and strategic hilltops from what it described as the “terrorists of the Nusra front”.

The military said it will continue operations against “terrorist gangs” – a catch-all term the government uses for rebel fighters.

“The operation started two days ago and is very big,” Rami Abdulrahman, the head of the Syrian Observatory for Human Rights monitoring group, told Reuters on Tuesday.

SOHR said Hezbollah, backed by fighters from Iran and the Assad regime, took control of the hills of al-Sarja and al-Arous in the south-western countryside of Damascus. Pro-regime forces killed 20 rebel fighters on Tuesday, including eight in an ambush.

Southern Syria is one of the last remaining bastions of the moderate opposition, which has been increasingly marginalized by the rise of extremist groups like Islamic State (Isis) and the Nusra Front.

Last year, the US approved a plan to arm and train moderate rebel groups to help in the fight against Isis. Western states hope the moderate rebels could form a nucleus of opposition to the embattled president.

In his statement before the House homeland security committee on Wednesday, the director of the US National Counterterrorism Center, Nicholas Rasmussen, said that of the 20,000 foreign fighters who have travelled to Syria, 3,400 of those are from western countries, including over 150 Americans who either travelled to Syria or attempted to do so. In September, US officials had put the number of Americans fighting with extremist groups in Syria at about two dozen.

The Syrian army backed by Hezbollah has been fighting to regain control of territories in the south. Last month, Israel attacked a Hezbollah convoy in Quneitra near the border, killing Jihad Mughniyeh, a party commander, as well as an Iranian general who was in the convoy. Jihad was the son of Imad Mughniyeh, the party’s former military chief who was assassinated in Damascus in 2008.

January’s attack prompted a Hezbollah response in the Shebaa Farms, a small strip of land occupied by Israel straddling its borders with Lebanon and Syria.

Hezbollah’s advance so close to the Golan Heights, the strategic hilltop overlooking Syria that was seized by Israel in the 1967 war, is likely to alarm Israel. The move would open another front from which Hezbollah could target Israel in the event of renewed conflict.