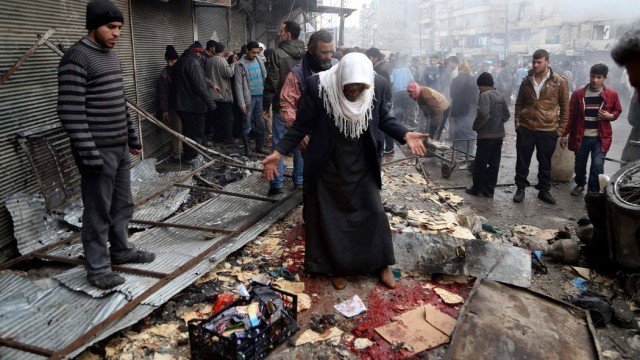 May 16, 2015 8:41 am 0
Syria’s schools feel blast of Russia war planes
WH accused of coordination with Assad
Don’t Leave it up to the Syrian Opposition

Pragmatic or idealistic policy makers, observers, and analysts of Syria have differing views with regard to how Syria should be governed and by whom.

On the idealistic side, the view takes an opposing stand. Religion or lack of matters little. Violence and terror in the face of freedom and dignity are the main actors in their theater. Especially if violence and death cause innocent lives to be lost.

Non-Syrian observers of the Syrian civil war are more likely to view it with pragmatism. This means religion and the violence perpetrated by religious zealots take front stage. Gassing children and women may force them to pause for few seconds before returning to calculating the costs and the benefits associated with religion as part of the fabric of a future Syria.

Observers of Syrian blood or Syrian origins are more likely to view Syria’s civil war from an idealistic angle. Secularism and Islam matter little to this group. Further, it often provides its own opinions to persuade the pragmatic lot to see it outside the scope of calculated risks. A good example of one of those opinions is to assert that al-Qaeda or ISIS are not recognized as legitimate states both can use to legislate their terror the way Iran does. Therefore, their danger is magnified as compared to that of Assad and Iran.

The pragmatists and the idealists are clashing today. Choice over pragmatic or idealistic Syria depends on the waves of give and take, the pulling and the releases by either side, which are attributed to their mindset over what is more important for Syria.

From our point of view, terror is terror. It matters little if it wears a turban or a tie. Blue-eyed, secular Assad tends to make people forget the ugly terrorist that he is the same way Hezbollah and ISIS terrorists are a constant reminder of how ugly religious terror really is.

Do we back a secular terrorist whose religious masters are out to destabilize the region and can call on their U.N.-provided pedigree to skirt or hide behind international laws, or do we back rag-tag illegitimate terrorists whose short-term damage can be greater than the secular terrorist?

Do we refuse to take sides with any terrorists no matter the colors they wear or the looks they embrace while taking a humanitarian position in support of those innocent people dying needlessly? Or do we select a terrorist over another one because of its short-term vs. long-term damage while ignoring death and destruction?

This is why Syria’s civil war, pulling several countries in different directions, is a complicated affair. Its denouement rests solely on tipping the balance over which is the best pragmatic position to embrace as dynamic outcomes on the field change and the risks associated with them change accordingly.

In the meantime, embracing a humanitarian approach is the wait-and-see position of choice. Those calling for all terror to perish while maintaining vigilance over the death of innocent women and children are indirectly exhibiting how little power they have. Those ignoring the humanitarian tragic angle are exhibiting how powerful they are when their action betray their sentiments.

The antagonistic and powerful countries fighting their wars in Syria leaves us little room to maneuver and certainly no say in any outcome.

Pragmatic or Idealistic Syria? The choices are really limited to those parties who have no fighters on the battlefields.