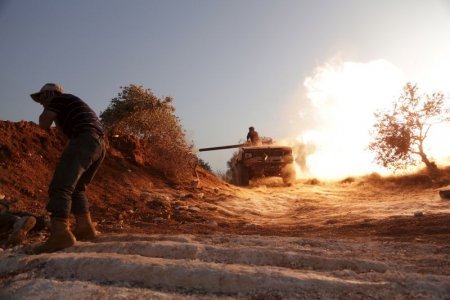 One Assad Army Base At a Time

Heavy clashes between Syria’s army and rebels erupted around a military base south of Idlib city on Monday as part of a wider battle for control of the northwestern province.

The Mastouma base is one of the last major army strongholds in a province controlled by a range of Islamist groups including al Qaeda’s Syrian wing, the Nusra Front, and the Islamist Ahrar al-Sham movement, fighting to overthrow the Assad regime.

Activists on the ground said most of the troops positioned in Idlib city were now in Mastouma after the rebels took over the provincial capital in March. The base is used for launching air raids in the province.

By capturing one Assad army base after another, the rebels have shown the military capacity to defeat the Assad regime.

There were reports of casualties in the battles. No further details were provided. The Syrian air force also bombarded the area in a series of raids, it added.

Syrian state television reported clashes around Filoun village to the west of the base, which is located on a major road heading south out of Idlib city.

The base is east of the town of Jisr al-Shughour, which was captured by the Sunni Islamist insurgents in April, an advance that brought them closer to the coastal areas that form the heartland of the minority Alawite sect to which Assad belongs.

It has been one of the toughest periods for Assad since the first two years of the conflict which spiraled out of protests against his violent rule, part of the wider 2011 Arab uprisings against autocratic leaders.

One Assad Army Base At a Time