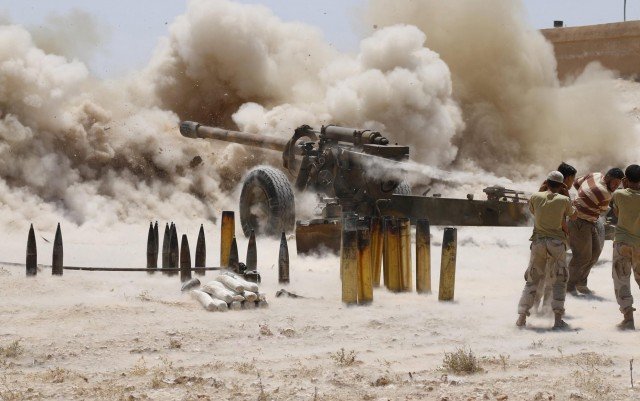 April 29, 2015 9:12 pm 0
Obama’s willful incompetency on Syria
Which is Worse: Those who Permit Violence or Those Who Refuse to Stop it?
Global March to Jerusalem? How About One to the Ruins of Homs Ayatollah Khameini?

In the span of a month, Syrian rebels routing Assad forces across the country’s northwest, flushing them out of strongholds in a string of embarrassing defeats for the dictator Baschar al-Assad.

The first to go was the city of Idlib, which fell to opposition fighters at the end of March, followed by the strategic town of Jisr al-Shughour last week and the Qarmeed military base on Monday. Troops are now under fire at the few remaining outposts still in government hands.

The disintegration of government forces in Idlib province, coupled with recent losses in southern Syria, has punctured the notion that Assad is on his way to defeating the four-year-old rebellion and undermined his claim to be a bulwark against the Islamic State group, which had eclipsed the rebels over the past year.

The campaign also points to a new unity and assertiveness within the constellation of opposition forces, which has long been riven by infighting. And it has exposed the government’s fundamental weaknesses — including lack of manpower, battle fatigue and a heavy reliance on Iran and other allies.

“It’s really indicative of some huge problems the regime has,” said Noah Bonsey, a Syria analyst for the International Crisis group. “What we’re seeing now is the best evidence yet of a trend we’ve already known about: the regime’s attrition rate is quite high and it can’t replace the soldiers and militiamen that it loses with equally effective Syrian manpower.”

Now in its fifth year, Syria’s conflict has killed more than 300,000 people and wounded more than 1 million with at least 500,000 disappeared. The relentless bloodshed has left the government scrambling to find recruits to fill its ranks, including by trying to curb widespread draft-dodging by the Alawites.

The government has consistently focused on what it considers the territory key to its survival: the heavily populated corridor running from south of Damascus up to the city of Homs and over to the Mediterranean coast. Rebels and the Islamic State group have carved off most rural areas to the north, east and south.

But even with the narrow focus on major cities and highways, the government has relied on the Lebanese militant group Hezbollah and Iran-backed foreign fighters to gain and hold territory. And it can only count on its allies’ support in the corridor where Hezbollah and Iran also have strategic interests.

In peripheral areas like Idlib, the increasingly beleaguered troops have been on their own. In fact, Syrian rebels routing Assad forces in Idlib and in Daraa.

Most of Idlib province — save the provincial capital and a few smaller towns and villages — has been out of government hands for years. Assad may be calculating that the cost of keeping the province is greater than the price of losing it. Syrian rebels routing Assad forces.

The opposition’s long-term success will largely hinge on whether it can maintain the previously unseen unity and coordination seen in the latest campaigns. The Idlib offensive has drawn together an estimated 10,000 fighters from across the ideological spectrum, who have coordinated fighting on multiple fronts.

The al-Qaida-affiliated Nusra Front and the hard-line Ahrar al-Sham group (Muslim Brotherhood) headline the operation through a coalition known as Jaish al-Fatah, or Conquest Army. It has been working in tandem with a spattering of other groups, including mainstream rebel brigades once commonly referred to as the Free Syrian Army.

Muayad Zurayk, an activist in Idlib city, attributed the opposition’s success in the province to the joint operations room.

“All operations stemming from the coordinated command center are done in the name of Jaish al-Fatah, It is forbidden to mention the name of any faction.”

For Syria’s notoriously fractious insurgent groups, this sort of coordination is no minor accomplishment. The opposition’s lack of a unified command has been among its greatest weaknesses.

On Syria’s ever-shifting battlefield, it is notoriously difficult to pin down concrete evidence of what forged this newfound cohesion among armed opposition groups.

Some observers, however, attribute it to the recent rapprochement between Saudi Arabia and Turkey, two of the largest supporters of the anti-Assad movement.

“I think it has a lot to do with the new Saudi relationship with Turkey,” said Mustafa Alani, the director of the security and defense department at the Gulf Research Center in Geneva. “You’re talking about strategic understanding between them.”

The two countries were long at odds over Egypt, where Riyadh supports the military-backed government and Ankara backs the now-banned Muslim Brotherhood of ousted President Mohammed Morsi. But Saudi Arabia and Turkey set their differences aside after the death of Saudi King Abdullah in January and the ascension to the throne of King Salman.

The new monarch has presided over a more pro-active foreign policy, including an air campaign against Shiite rebels in Yemen, known as Houthis, who are supported by Iran. Riyadh appears similarly assertive in Syria, where it hopes to forge greater rebel unity in the struggle to topple Assad, another ally of Iran.

“I think the Qatari-Turkish alliance was working on the issue long before the Saudis became part of it,” Alani said. “The Saudis came in immediately after King Salman took power.”