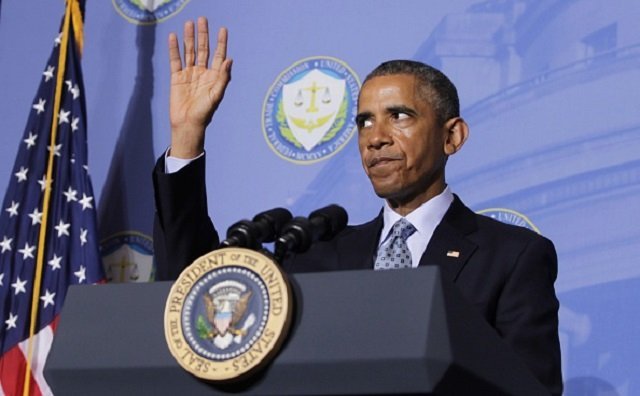 During the State of the Union address, Mr. Obama patted himself on the back for striking an agreement on the removal of Assad’s CW’s that, according to Reuters, only 15 tons of the first batch of 500 tons have been removed so far. Another 700 Tons of the deadliest kind await removal.

Next time your child comes home with an F on his report card, give him a big hug for avoiding the rest of the alphabet. The ones Obama seems to be getting for his Syria’s removal of CW’s.

Let us review, one more time, the damage of Obama’s foreign policies everyone around him is trying hard to keep us from seeing.

The President has partnered with the terrorists in Iran and let loose the terrorists of al-Qaeda in Syria and Iraq. Any way you slice this onion, you cannot but shed tears for America and for all the sacrifices we made in the War on Terror during the Bush years.

Admiral James Clapper, in front of the US Senate, testified that Syria’s al-Qaeda is training recruits to attack America. AP reported on January 29:

“The Syrian militant group tied to al-Qaida, the al-Nusra Front, wants to attack the United States and is training a growing cadre of fighters from Europe, the Mideast and even the U.S., the top U.S. intelligence official told Congress on Wednesday.”

Clapper’s testimony, according to AP, estimated “75,000 to 110,000 rebels overall battling the government of Bashar Assad in Syria, some 26,000 are extremists, and about 7,000 of them foreigners from some 50 countries, including Europe.”

“Not only are fighters being drawn to Syria, but so are technologies and techniques that pose particular problems to our defenses”.

Ignoring the Assad regime has turned into an Obama’s War on America. Right before our eyes. Yet, the US media still gives this president a free pass for all his ignorance, amateurism, and the unreal world he lives in. Don’t they realize this will stifle Hillary Clinton ascent to the White House in the years to come? Bill Clinton must take action to peel away from this president by highlighting his shortcomings in the Middle East.  Don’t wait for Iran to build a nuke, use Obama’s failure on Syria’s CW’s to show where Iran is heading.

No one is holding this president accountable for the chemical weapons fiasco on top of the AQ fiasco in Syria. It seems the media is in agreement with Obama’s War on America

Now consider how the thug Assad is running circles around Obama on CW’s and please tell me Iran won’t duplicate when it comes to its nuclear program. Why complain though, Obama knows it already but as long as he has the pulpit, he will lie to the American people or ignore Iran all together. Empowering America’s enemies is clearly part of Obama’s agenda. Meanwhile the media keeps its head in the sand ignoring the mediocrity of this president whose domestic policies already cost us $7trillion in additional debt and whose foreign policies are set to cost us Trillions more because of a large and looming terror problem Obama is ignoring.

In the meantime, a story on BBC cites the destruction of abandoned homes by the Assad regime. To what purpose you might ask? To permanently keep Syria’s refugees strewn between Turkey, Lebanon, and Jordan as punishment for these countries for taking the rebels side and to tip the demographic balance in favor of the minorities in Syria.  It is not only about Syria, Obama’s train wreck is affecting every country in the Levant and the Gulf, all of them now considered past allies as far as Obama is concerned.

Congress must find a way to impeach president Obama now to reverse the looming disasters to hit our shores. How can we ignore all the bad scenarios before us Obama himself seems to bask in their outcome.

This president is the biggest threat to national security. This is Obama’s war on America.