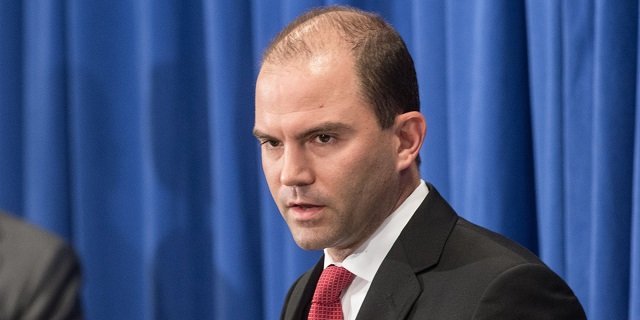 TFS Note: The man behind our Syrian foreign policy is Ben Rhodes. Probably the dumbest man working for Barack Obama.

Last year, President Obama asked for $500 million to arm and train the Syrian rebels. This year alone, the effort is supposed to train 3,000 soldiers to fight ISIS.

But so far, it’s only yielded about 60 fighters. Of those 60, over half have been killed, wounded, or captured in the past week alone by Jabhat al-Nusra, al-Qaeda’s Syrian branch. American officials, according to the New York Times, “did not anticipate an assault from the Nusra Front.”

This defeat underscores a painful truth: Obama’s Syrian rebel plan has, so far, been a complete disaster. Worse, it has been a disaster that was foreseeable. The last week’s events were the direct result of fundamental contradictions in America’s Syria policy, contradictions that were obvious from the start. The administration has trapped itself in a bad policy — and it’s not quite clear how to get out.

“I blame everybody for this,” says Micah Zenko, a senior fellow at the Council on Foreign Relations. “I don’t know anybody above [the rank of colonel] who didn’t think this was a terrible idea.”

The program is meant to train and equip rebels who will fight ISIS in Syria. But the problem is that, broadly speaking, America has three goals in Syria, and they don’t line up:

These three objectives are fundamentally irreconcilable. In order to retake ISIS territory, the United States needs allies on the ground, which means Syrian rebels (Kurdish forces aren’t enough on their own). But those rebels typically see Assad as a bigger priority than ISIS. If the US were to simply train them, equip them, and let them go their own way, they’d likely use their American support to focus on fighting Assad.

Assad would see that, quite clearly, as an open American campaign against him. So far, his anti-aircraft defenses have yet to fire on American planes flying over Syria to bomb ISIS. That could easily change if US-backed rebels began waging war on Assad. Even if it didn’t, toppling Assad by force isn’t the US goal — fighting ISIS is.

At the same time, al-Qaeda and other hard-line Islamist rebels in Syria make the whole problem harder. Because Jabhat al-Nusra is currently one of the strongest groups in the rebel movement, anything that helps the rebels is likely to help al-Qaeda, which the US wants to avoid. Moreover, fighters in the civil war often shift sides, so any training and arms the US gives to one rebel group could easily end up benefiting al-Qaeda or a similar hard-line Islamist group.

And any non-extremist rebels the US did train would have few allies on the battlefield: Assad and ISIS, the two most powerful groups in Syria, would both see those rebels as an enemy. So would other extremists such as al-Qaeda, given that the US is bombing those groups as well. So whatever US-backed force walked onto the Syrian battlefield would find itself the enemy of virtually every group there, hopelessly outgunned. And that is indeed what has happened.

There is simply no feasible way for the US to use Syrian rebels to defeat ISIS while also dodging conflict with Assad and avoiding strengthening al-Qaeda. This fundamental, irresolvable tension doomed the program to failure from the start.

The train-and-equip program was rushed out in response to ISIS’s shocking victories last year. It was thus implemented without any real mind to solving the fundamental tension in America’s Syria policy.

It’s important to remember how panicked everyone got about ISIS for several weeks in the summer of last year. After the group swept northern Iraq in June, taking Iraq’s second-largest city, Mosul, the Obama administration came under tremendous pressure to develop a plan to defeat the group. That reached a crescendo when ISIS beheaded two American journalists on camera at the summer’s end.

“It was the general response triggered by the beheading videos last summer,” according to Zenko. “Once the videos happen, it triggers the impulse to do something, with greater US airstrikes and providing US support on the ground.”

The administration concluded, reasonably, that ISIS couldn’t be driven out of its territory without a bigger push from Syrian rebels. The CIA had a program to train friendly Syrian rebels, but it had largely failed. “The CIA just doesn’t have the reach, and doesn’t do this for a living like the Pentagon does,” Zenko says.

The administration, seeing the CIA plan was failing, began to develop a separate Pentagon-led program to train Syrian rebels. After Mosul fell, the administration beefed up the Pentagon program from a proposed budget of $200 million to $500 million. But with all of that money, the Pentagon had not solved the problems inherent in the strategy.

“This train-and-equip program was probably doomed from the beginning,” Jason Lyall, an expert on insurgencies at Yale, wrote in an email.

The problems were manifold — but they all stemmed from the basic contradiction in America’s Syria policy. In order to avoid risking conflict with Assad, it declared that any US-trained force would only target ISIS. That limited the potential recruits severely. Then it imposed strict vetting requirements designed to make sure that US-trained fighters had no ties to extremist groups, which is a problem because the fluid nature of alliances on the Syrian battlefield means a lot of fighters have some kind of link to extremists. There were just very few people left who qualified.

“Despite significant effort, [these] two constraints have really hobbled its effort,” Austin Long, a professor at Columbia University, says of the program to arm Syrian rebels. “You’ve got a double whammy for the program. You’ve put constraints on action that are going to turn off some. … And the pool that remains, it’s hard to get them into the program.”

When the US began bombing al-Qaeda in Syria in September, it also dealt the final blow to its own program of arming friendly rebels. The strikes made sense: Not only is al-Qaeda an American enemy, but they were necessary to help ensure that al-Qaeda could not too easily benefit from ISIS’s decline.

But this also meant that any US-trained rebels would immediately become targets for al-Qaeda fighters, who would see them as an enemy. The al-Qaeda group in Syria probably feared, quite reasonably, that any American-trained rebels would eventually turn on them as part of America’s war on extremism in Syria. So better to take them out first.

That is precisely what happened almost immediately after the first US-trained rebels entered the battlefield. In late July and early August, Jabhat al-Nusra attacked Division 30, the unit of US-trained Syrians. The al-Qaeda franchise killed, wounded, or captured more than half of Division 30, including one of its leaders. Maybe if there were more fighters, they could have resisted more effectively. But there weren’t, because the program was limited by America’s other objectives in Syria.

Most damningly, the US was taken by surprise when al-Nusra attacked its proxy rebels. The Obama administration reportedly thought Nusra would welcome the fighters as allies against ISIS. The fact that they got this so wrong suggests they were a little blind to the problems with their policy.

Obama’s Syria policy isn’t all bad. The airstrikes in the country have helped weaken ISIS regionally; in both Iraq and Syria, ISIS has suffered serious setbacks. The group is on the road to defeat, in the long run, though that could take years, and in the meantime the US’s failed rebel-training policy is going to make that road longer and more painful.

This policy was, in many ways, meant to be a middle ground between even worse options. The administration clearly thought the status quo policy — airstrikes, supplemented with very occasional special forces raids — wasn’t enough. At the same time, it has foresworn a major ground intervention.

Those are indeed two deeply unattractive options, and so the pressure to do something led them to find another option. Because the administration has been rather risk-averse on Syria, it picked a relatively low-risk strategy, but it is a strategy that is so obviously flawed that it’s remarkable they bothered to go ahead with it at all.

The same could be said of the recent plan, worked out between the US and Turkey, to carve out an “ISIS-free” zone in northern Syria as a safe haven for friendly rebels.

Without addressing the fundamental problems in America’s Syria policy, it’s hard to see how this middle approach could succeed. So far, the strategy has been if anything counterproductive: Instead of helping persuade Syrian rebels to work with the United States, it’s sending them the message that being an American ally can get you killed.

The risks of conflict with Assad or bolstering extremists may simply outweigh the benefits from having a real Syrian proxy force. If that’s the case, the administration should just be honest and shutter the train-and-equip program. Because one thing is clear: Sending out small numbers of allies to die at al-Qaeda’s hands isn’t a winning strategy.

Argentine President: Obama Administration Tried To Convince Us To Give Iran Nuclear Fuel
US Rapprochement with Syria:  The Bad, The Immoral, and The Wrong – Part One
Will Obama Deploy U.S. Troops to Battle Sunnis for Iran?
Slippery Barack Obama 976