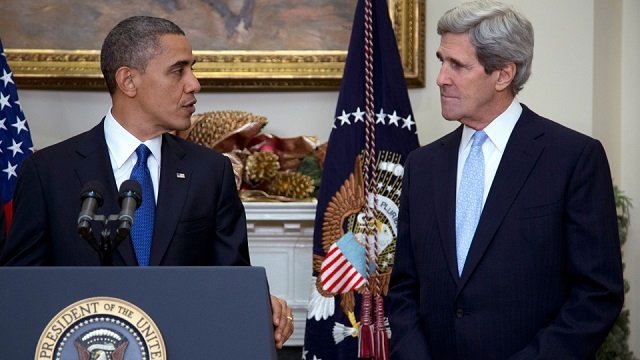 Obama, Kerry surrender Syria and the Middle East to Iran

In the Middle East, tribal politics and insidious power grabs are par for the course. Thus, the only effective way to deal with regional hegemons like Iran is from a position of strength, not appeasement.

President Obama and Secretary Kerry, however, have allowed Iran to drive the end game in Syria – and to drive America into irrelevancy.

This administration’s capacity for appeasement, weakness and dysfunction with regard to foreign policy – particularly on Syria – seems to know no limits. First there were meaningless red lines, followed by chemical weapons distractions, and now a deadly diplomatic dance with Tehran.

The crisis in Syria has become so severe that the United Nations is no longer even counting the dead, which at last tally was over 120,000.

Iran has been the puppet master behind Assad’s killing machine, and yet Secretary Kerry welcomes them to the table with open arms, saying that we are “happy” to have “Iran be helpful.”

Not only is this a peculiar assertion — as if he has only just tuned in to the regional crisis – but it is a slap in the face to all those who have given their all for freedom in Syria.

American foreign policy actions are never in a vacuum. Every comment and act sends a message to our enemies. In six years, the Obama Doctrine of appeasement has decimated the United States’ ability to present itself as an arbiter of freedom.

It stands to reason that regardless of the result, any Iranian involvement in the Syrian negotiations will strengthen the reign of Bashar Assad or his ilk and help to perpetuate the genocide of the Syrian people.  It will also strengthen the resolve of Sunni radical Islamists like the Al Qaeda affiliates of ISIS (Islamic State in Syria) and Jubhat al-Nusra the other side of the same fascist coin.

The sectarian war between Sunni and Shi’a Islamists is now spreading and threatens to destabilize the entire region.

Iran is using the Syrian opportunity as a mechanism to arm Hezbollah with unprecedented technology that it is now moving into Lebanon.

The Anbar province of Iraq is on the verge of being taken over by Al Qaeda which is pushing Prime Minister Maliki even more heavily towards Tehran. Islamists, whether Shi’a or Sunni, are a threat to the United States, Israel, and global security as a whole.

Those who know the realities inside Syria have been calling for American leadership and military aid since 2011, long before Al Qaeda came in to fill the vacuum and long before Tehran diplomatically, financially, and militarily took over Syria as a full-fledged client-state.

Yet our government has sat idly by while Iran effectively annexes Syria.

Iran has one goal in Syria, and that is to broaden its growing “Shi’a Islamist curtain.”

The longer Kerry ignores that threat, the longer Iran believes it will pay no price for aggression, and the stronger Tehran, Assad, Hizballah, and Maliki become.

The United States already made a grave mistake by not fully supporting Iran’s own uprising in 2009. In Syria, the Obama administration has cemented its “on bended knee” doctrine of propping up the enemies of the people even in the face of genocide.

If we hope to see an end to the bloodbath in Syria and to see a glimmer towards peace in the region, we must abandon the Obama Doctrine and choose sides in this ideological battle.

There are more than two. We must support the majority of Syrians. Those who have had the courage to take on both the genocidal tyranny of the Assad regime and the terror of the Al Qaeda Sunni factions.

They deserve the opportunity for freedom. These Syrians represent neither Islamists nor Arab fascists, but a third front – a front supporting individual liberty.

As Obama placates Iran and the world turns its back again on Syria, the majority of Syrians continue to languish without hope. With over 120,000 dead, and over 3 million refugees, a nation that borders our ally Israel and could have been a bulwark against both Sunni and Shi’a radicalism has become potentially the world’s leading exporter of both Sunni and Shi’a jihadists for years to come.

M. Zuhdi Jasser is a former U.S. Navy Lieutenant Commander whose parents fled Syrian Ba’athist oppression in 1966. He is president of the American Islamic Forum for Democracy

and the author of A Battle for the Soul of Islam.

Obama, Kerry surrender Syria and the Middle East to Iran