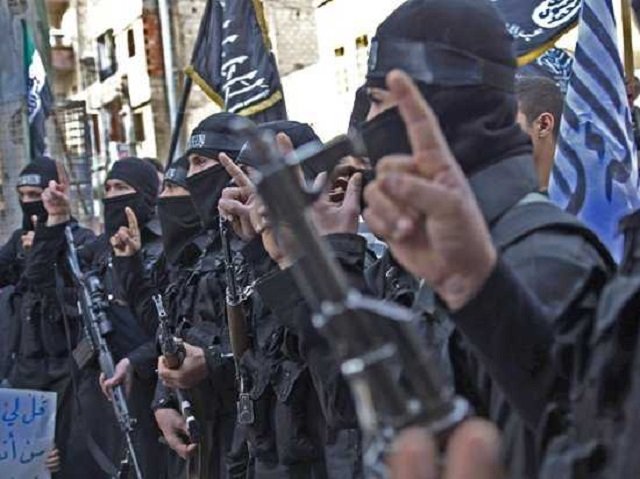 The New York Time is reporting that Syrian militants are trying to recruit Americans to attack the US. In a revealing piece, reporters Michael Schmidt and Eric Schmitt write:

“Islamic extremist groups in Syria with ties to Al Qaeda are trying to identify, recruit and train Americans and other Westerners who have traveled there to get them to carry out attacks when they return home, according to senior American intelligence and counterterrorism officials.”

To all the millennial dimwits, the far right and far left fools who believed the war in Syria is none of our business, Sarah Palin for saying “Let Allah sort it out”, and Denis McDonough who has advised the President to abandon Syria, I am curious as to what you have to say about this report.

The President let Syria fester just to please the Mullahs of Iran, but he now must take precautions at home to prevent another 9/11 on his watch. How is that for a successful US foreign policy? When will the appeasers learn that peace with men of violence creates more terror, more chaos, and more wars?

No one seems to remember that Iran came out stronger from its Iraq-Iran war and the extremists flowing with abandon in the region, courtesy of the Assad regime, are now stronger than ever before.

The Obama Administration miscalculated the effects Assad’s sectarian war will have on the region. This blunder is now coming back to haunt the US as well as Europe, and I believe whatever the New York Times printed, it represents only 10% of the reality. Obama will under–spin bad news and over-spin good news. It is highly probable that the information in this article has been leaked as a warning from Obama that he warned us just in case domestic terror erupts again.

When problems arise, the first thing Mr. Obama does is imagine the scenario of what he needs to say today in order to find the excuse tomorrow. That is his new style after the “you can keep your doctor” lie. Do not be surprised if terrorist cells have already formed in the US and are preparing to attack the innocent.

We urge the US Congress to investigate this matter urgently and openly. The US cannot afford to be a sitting duck because we have a President in the White House who weaves personal conveniences into policies. Much is at stake here and absent a President willing to take action, or take responsibility for his inactions in Syria, with the results before us speaking for themselves, it is incumbent upon the US Congress to act swiftly to protect this nation.

It is still our business.

We also urge this President to abandon the folly of outsourcing or listening to the likes of Putin or Erdogan and re-open strong channels with US traditional allies like Israel and Saudi Arabia. Obama abandoned both allies and now it is time for him to ask himself this important question: Is the US safer today than five years ago?

Only our allies working with responsible US politicians around the clock with their eyes open are able to secure US interests. Putin is out to destroy America, not help her.

IED’s in Syria
The head of the snake
Is Iran flexing the White House muscles?
Radicalism 567