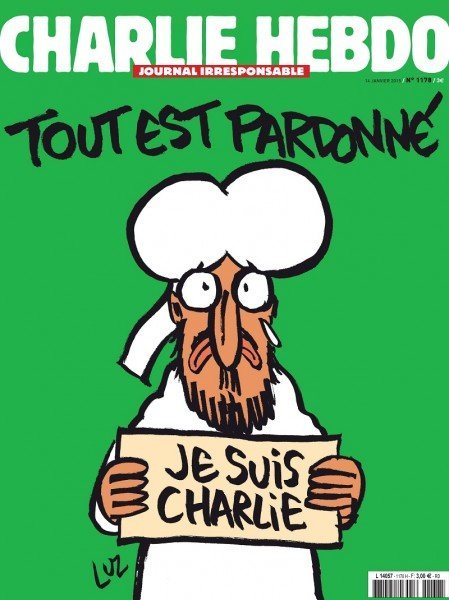 (AP) – Muhammad will be back on the cover of the next edition of Charlie Hebdo, along with a message of forgiveness from surviving staffers at the French satirical magazine where 12 people were killed last week by a pair of Islamist brothers angered over the publication’s penchant for showing images of the prophet.

The decimated, but uncowed magazine upped its usual print run of 60,000 copies to 3 million for the magazine, due out Wednesday but released to the French newspaper Liberation. Fierce bidding on eBay had editions commanding as much as $500 following the outpouring of support for Charlie Hebdo, whose four top cartoonists were among the dozen killed. Editor-in-chief Gérard Biard said in a Tuesday radio interview the decision to run a cartoon if Muhammad holding a a “Je Suis Charlie” sign with the caption “Tout est pardonne,” or “All is forgiven,” and said the message was not that Muhammad was offering forgiveness, as some initially assumed.

“It is we who forgive, not Muhammad,”

Eight Charlie Hebdo staffers were killed in the attack, including the magazine’s editorial director, Stephane Charbonnier, who drew under the name “Charb.”

Biard said tomorrow’s issue is meant as both a memorial to fallen co-workers and proof that the magazine’s mission of irreverence has not been compromised.

“We needed to figure out how to continue laughing and making others laugh,” he said. “We wanted to analyze, say something about the events. This drawing made us laugh.

He continued: “We did not want masked men on the cover. We didn’t want more of that. That’s not us. We didn’t want to add to the gravity. It helps to be able to breathe a little.”

The cover was created by cartoonist Renald Luzier, who draws under the name “Luz,” and created what Biard called a “moving but not sad” work.

“Seen by Luz, Mohammed is much more sympathetic than even the Muslims see him. He’s a ‘nice little guy’ as Luz, puts it. Those assassins killed people who draw nice little guys. We wanted to show the ludicrousness of it.”

The New York Times reported late Monday that when Luz showed the drawing to staffers, he was greeted with laughter, applause and ironic shouts of “Allahu akbar!”

But one of Egypt’s top Islamic authorities has warned Charlie Hebdo against publishing the cartoon.

Egypt’s Dar al-Ifta, which is in charge of issuing religious edicts, on Tuesday called the planned cover an “unjustified provocation” for millions of Muslims who respect and love their prophet.

The statement said the cartoon is likely to cause a new wave of hatred in French and Western societies and called on the French government and others to reject “the racist act” by Charlie Hebdo.

Charlie Hebdo’s past caricatures of the Muslim prophet appear to have prompted last week’s attacks, part of the worst terrorist rampage in France in decades. A total of 12 people were killed at the newspaper’s offices by Said and Cherif Kouachi, French-born brothers who had trained with Al Qaeda in the Arabian Peninsula.

Some witnesses reported that the attackers at the paper’s offices shouted “We have avenged the prophet.” Many Muslims believe all images of Muhammad are blasphemous.

French police said Monday that as many as six members of a terrorist cell involved in the attacks may still be at large.

France saw its biggest demonstrations in history Sunday as millions turned out to show unity and defend freedom of expression.