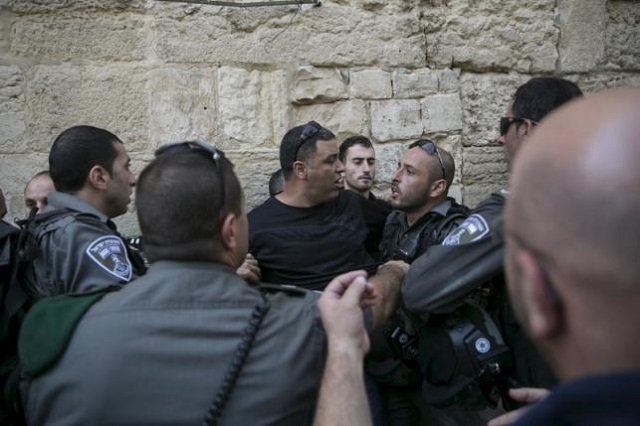 September 15, 2015 6:30 am 0
Just another proxy war
No Apologies for Supporting Israel
Who is Israel’s Number One Enemy?

That wonderful Iran Deal President Barack Obama has concocted with the Iranium Mullahs is beginning to show its results in the disturbances we are witnessing in Israel today.

Israeli police clashed with rock-throwing Palestinian youths who barricaded themselves inside Jerusalem’s al-Aqsa mosque on Tuesday, police and witnesses said, in the third day of violence at the sacred site.

Masked Palestinians hurled flares at the security forces, who said they were trying to secure the plaza to stop what they called Palestinian attempts to disrupt visits to the compound on Jewish New Year.

Young Palestinians are usually instigated to clash with Israeli police by outside forces. There is nothing “spur of the moment” about these clashes, which leads us to believe that Obama indirectly responsible for these clashes by empowering the bad behavior of Iran with his Iran Deal.

The United States and U.N. Secretary-General Ban Ki-moon both said they are concerned about the violence at the site, revered by Muslims as the Noble Sanctuary and by Jews as the Temple Mount.

It is typical of Barack Obama, the ultimate dirty Chicago politician, to show sympathy for both sides and ignore that his Iran Deal is assisting the Iranium Mullahs in fomenting chaos in the region. Obama indirectly responsible for these clashes in Israel.

Israeli Prime Minister Benjamin Netanyahu was due to hold an emergency ministerial meeting late on Tuesday, called after an Israeli motorist died in a crash police said was caused by suspected stone-throwing.

Some stone throwing spread to other areas of the Old City, police and a witness said, with no injuries reported. Obama indirectly responsible for the Iranian induced chaos.

There have been surges of clashes and stone-throwing in Jerusalem in recent months and Israeli-Palestinian peace talks have been frozen since 2014.

Palestinians want East Jerusalem, annexed by Israel after the 1967 war, as the capital of a state they aspire to establish in the occupied West Bank and in the Gaza Strip.

Israel regards all of Jerusalem as its indivisible and eternal capital.

Question for Israel: When Will Gorilla Nasrallah Meet His Maker?
The Bus Explosion: Syria Cannot Speak for Extreme Sunni Islam Anymore Than Iran Does
Saving Assad will come back to haunt us one day
Iranian Terror 594 Slippery Barack Obama 976