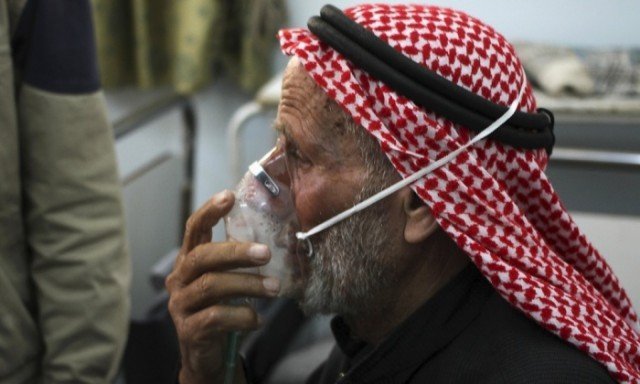 May 24, 2015 7:20 am 0
Obama Knows How to Harm Israel Without Looking the Role
It is not about the Arab Spring, it’s about Obama’s Policies
Assad Using Chemical Weapons. Obama Still Constrained in Syria.

On a spring afternoon in mid-March, a barrel bomb believed to have been laced with chlorine fell on a village in northern Syria. The gas made its way through a ventilation shaft, suffocating a family of three children, their parents and their grandmother.

“One of the children died in silence before we got to the hospital,” said Raed Saleh, the head of a Syrian civil defence force called the White Helmets. “We did what we could to save her, but dying in silence was her fate. Death in silence before the whole world.”

Saleh said it was the second chemical attack that night, an opening salvo in a campaign in which three-dozen such barrel bombs were dropped, according to medical and humanitarian workers, mostly on civilian targets in Idlib province, which fell to a coalition of rebel fighters in March.

Muhammad Tennari, the manager of Sarmin hospital, was there on that first night, and since then has treated the near-daily stream of victims with symptoms of chlorine exposure.

“The children who came to us were suffocating and we couldn’t do anything because they had breathed too much chlorine,” Tennari told the Guardian from Idlib, describing the most difficult cases he had to handle. “It’s very distressing to see children suffocating in front of you and you cannot do anything.”

Syrian civil defence workers and doctors have documented 35 barrel bomb attacks where chlorine was allegedly used since 16 March – the latest of which was on Tuesday near the former regime stronghold of Jisr al-Shughour – with more than 1,000 injuries and nine deaths. More than 20 civil defence workers have been wounded in rescue operations.

“Whenever the regime loses an area or a city it arbitrarily takes revenge on civilians,” said Saleh. “It is targeting civilians.”

Tennari said most of the victims came in without physical wounds, but had acute respiratory problems and burning, bloodshot eyes. Videos show medics pouring water on the victims after removing their clothes to reduce their skin’s exposure to the chemicals, before giving them oxygen masks and respiratory medication.

“Most of the targeting is of civilian areas, and most of the injured are women and children,” Tennari said. “It’s almost daily now.”

The vast majority of the attacks occurred in towns and villages in Idlib, and civil defence workers say they have run out of medicine to treat the symptoms of chlorine attacks.

The northern province has suffered from a punishing air campaign by Bashar al-Assad’s regime after most of it fell to rebels backed by Saudi Arabia and Turkey in late March. The rebels, known as Jaish al-Fatah, include conservative Islamists, mainstream Free Syrian Army battalions, and Jabhat al-Nusra, the al-Qaida affiliate in Syria.

Assad’s air force has launched more than 2,000 raids on Idlib since its capital city was taken by the rebels on 28 March, according to the Syrian Observatory for Human Rights.

The escalating air campaign has also coincided with the alleged intensified use of chlorine as a weapon, which is banned under the 1993 Chemical Weapons Convention.

The chlorine campaign began just over a week after the UN security council passed a resolution under chapter 7 of the UN charter condemning its use. A fact-finding mission by the Organisation for the Prohibition of Chemical Weapons, which is charged with destroying Syria’s stockpile of chemical weapons, concluded that chlorine was used in 2014 in Syrian villages, but did not ascribe responsibility.

The Assad regime’s backers in the security council deny it is responsible for chlorine use, but the government is the only faction in the Syrian civil war with aeroplanes.

Saleh said: “This dithering in not referring the regime to the international criminal court gives it an opportunity to kill more civilians with these weapons.”

But the Obama administration, which once regarded chemical weapons as a red line, is unlikely to press Assad on the latest chlorine attacks. Though Obama said the US was assisting investigators who were looking into the chlorine allegations, he stunned observers at a press conference in Camp David by saying chlorine was not “historically listed as a chemical weapon”.

“It is true that we’ve seen reports about the use of chlorine in bombs that had the effect of chemical weapons,” Obama said. “Chlorine itself historically has not been listed as a chemical weapon but when it is used in this fashion can be considered a prohibited use of that particular chemical.”

Chlorine has many uses, but it was one of the first weaponised chemical agents used by Germany in the first world war, including at the battle of Ypres.

“Obama’s history on chlorine is wrong,” said Nadim Houry, Human Rights Watch’s deputy director for the Middle East and north Africa. “But the key issue is the present and the lack of steps that the US and Russia – the two architects of the chemical weapons deal in Syria – have taken to stop chlorine attacks in Syria. So far, Russia is refusing to even name the culprit, while the US condemns but otherwise tolerates Assad’s ongoing violation of global norms against chemical warfare.”

Houry said HRW is pushing for a mechanism to ascribe responsibility for the chlorine attacks and impose sanctions on the culprits, a step that has been resisted by Russia, which backs Assad.

Wissam Tarif, from the advocacy group Avaaz, which has campaigned for a humanitarian no-fly zone in Syria, said Obama’s statement amounted to a green light for the regime to continue its alleged chlorine campaign.

“Syrian regime forces have been raining down chlorine bombs on civilian neighbourhoods almost every day since Obama’s Camp David statement, and it is no coincidence,” said Tarif.

When Will America Realize Obama is Unfit to Lead?
Obama Mentally Unfit
Syria’s Peace of the Grave
Slippery Barack Obama 976