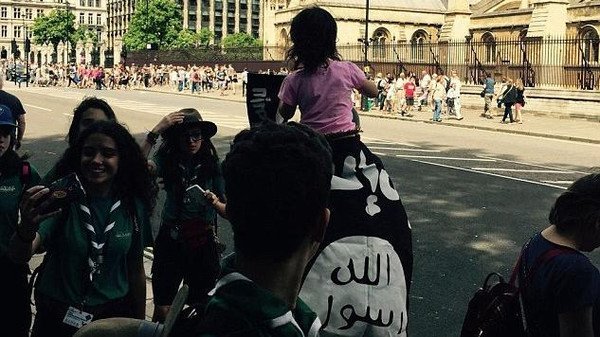 July 6, 2015 8:49 am 0
Putin is serious about entering Syria — and not to go after ISIS
Kerry: Assad, ISIS relationship symbiotic, not real enemies
We stood by while others carved up Syria

A man was pictured draped in what appeared to be an ISIS flag, walking past Big Ben and the Houses of Parliament in central London, with a young child on his shoulders waving a miniature replica of the flag.

The man, who was confronted by police, was allowed to walk freely, as carrying a flag is not an offence in itself and his actions deemed to be “within the law.”

The photos, which were taken by a tourist and posted on a Korean web forum, according to the Evening Standard, show the man walking past a group of children with a black flag around his shoulders, while carrying a young child dressed in pink waving the smaller flag.

“This man was spoken to by officers, with consideration given to relevant legislation, particularly the Public Order Act, and the decision was taken by officers at the time that the man was acting within the law. He was not arrested” a spokesman for the Metropolitan Police told The Independent.

It is considered that while support of ISIS and joining the militant group is unlawful, it is however “not a criminal offence to support the creation of an independent state,” the article reported.

When asked whether the police officers considered the flag as that of the extremist group ISIS, the police spokesman responded that it certainly seemed to be.

The incident comes after the Tunisia beach attack claimed by ISIS and just days before the UK will mark the 10th anniversary of the 7/7 bombings that were carried out by extremists, killing 52 people on July 7, 2005.

20,000 Foreign Fighters Flock To Syria, Iraq
Is Obama getting permission from Iran to strike ISIL?
Explaining why ISIL attracts Muslims from the US and the EU
Radicalism 567