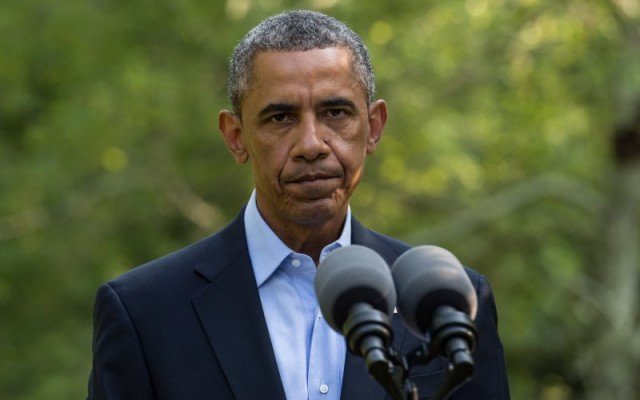 Obama Told Lawmakers Criticism of His Syria Policy is Horseshit

By Josh Rogin – The Daily Beast

The argument that America should have done more in Syria, made for years by foreign policy leaders in both parties and several members of Obama?s senior national security team, was brought back to the fore this past weekend. Obama and Hillary Clinton gave dueling interviews in which they publicly split on whether the security and humanitarian catastrophe in Syria could have been avoided if the United States had played a larger role. Obama?s outburst on July 31, one week prior, reveals the criticism was already getting to him, even before the White House tried to?deflect Clinton?s remarks?as pre-presidential political posturing.

Just before the congressional recess, President Obama invited over a dozen Senate and House leaders from both parties to the White House to talk about foreign policy. According to two lawmakers inside the meeting, Obama became visibly agitated when confronted by bipartisan criticism of the White House?s policy of slow-rolling moderate Syrian rebels? repeated requests for arms to fight the Assad regime and ISIS.

According to one of the lawmakers, Sen. Bob Corker asked the president a long question that included sharp criticisms of President Obama?s handling of a number of foreign policy issues?including Syria, ISIS, Russia, and Ukraine. Obama answered Corker at length. Then, the president defended his administration?s actions on Syria, saying that the notion that many have put forth regarding arming the rebels earlier would have led to better outcomes in Syria was ?horseshit.?

Corker?s office declined to comment for this story. But days after the White House meeting, Corker wrote a?blistering op-ed?for?The?Washington Postcriticizing Obama?s handling of foreign policy. ?Today, after three years of bold rhetoric divorced from reality, 170,000 Syrians are dead, and we are not innocent bystanders. The president encouraged the opposition to swallow deadly risks, then left them mostly hanging,? the senator wrote. ?Extremist groups from Syria have surged into Iraq, seizing key territory and resources, and are threatening to completely undo the progress of years of U.S. sacrifice.?

Top Democratic lawmakers agreed with Corker and Clinton that doing more to support the moderate rebels would have at least had a chance of averting or mitigating the current crisis, which has now spread to large parts of Iraq as ISIS expands its newly declared Caliphate.

?The president still feels very strongly that we are deluding ourselves if we think American intervention in Syria early on by assisting these rebels would have made a difference,? Engel told The Daily Beast in an interview. ?He still believes that. I disagree, respectfully. They were not looking for U.S. troops, they were looking for help and the Syria civil war started with the most noblest of causes.?

In a?New York Times?interview?published Aug. 8, Obama said that the idea arming the rebels would have made a difference had ?always been a fantasy.?

?This idea that we could provide some light arms or even more sophisticated arms to what was essentially an opposition made up of former doctors, farmers, pharmacists and so forth, and that they were going to be able to battle not only a well-armed state but also a well-armed state backed by Russia, backed by Iran, a battle-hardened Hezbollah, that was never in the cards,? Obama said.

Clinton told?The Atlantic?in an?interview?published Aug. 10 that Obama?s ?failure to help build up a credible fighting force of the people who were the originators of the protests against Assad?there were Islamists, there were secularists, there was everything in the middle?the failure to do that left a big vacuum, which the jihadists have now filled.?

In 2012, Clinton revealed that she and then-CIA Director David Petraeus had pushed a plan earlier that year to arm the Syrian rebels that was rejected by the White House. Defense Secretary Leon Panetta and Joint Chiefs Chairman Gen. Martin Dempsey later said they supported the plan at that time. Many lawmakers, including Corker and Engel, still support that plan and they agree with Clinton that Obama?s policy left a vacuum that ISIS rushed to fill.

?[ISIS?s threat in Iraq] is definitely tied to Syria because when the uprising started against Bashar al Assad, it was a movement of people wanting freedom and democracy in Syria, it wasn?t a war involving jihadism at all,? Engel said. ?They desperately needed our help, which we didn?t supply, and as a result ISIS got the upper hand. We are now paying the price of that.?

Not all lawmakers support arming the rebels; Sen. Rand Paul, for example, is on the record opposing the use of U.S. military resources to fight ISIS in Iraq or Syria. Also, Clinton and many lawmakers acknowledge that arming the rebels was risky and might not have worked. The weapons could?ve?fallen into the extremists? hands, and Syria might have remained a jihadist free-for-all.

?Well, I did believe, which is why I advocated this, that if we were to carefully vet, train, and equip early on a core group of the developing Free Syrian Army, we would, number one, have some better insight into what was going on on the ground,? Clinton said.