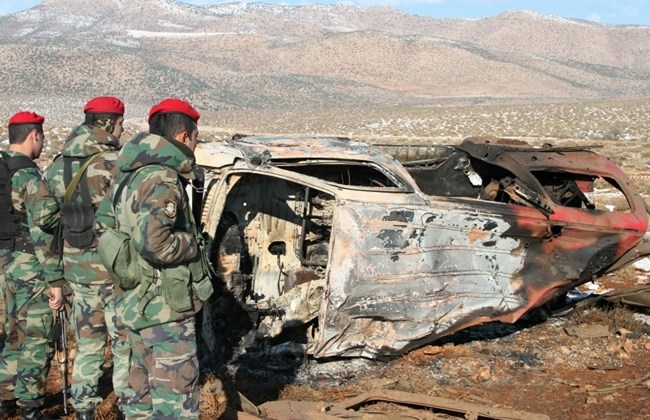 Israel Keeps Hezbollah in a Constant State of Fear

Two missiles from an Israeli drone targeted a four-wheel-drive vehicle carrying two members of Lebanon’s Hezbollah on Wednesday near the Syria-Lebanon border. The attack did not harm either, a member of the militant group said. For its part, Israel keeps Hezbollah in a constant state of fear.

The Hezbollah official said one missile blew up near the vehicle as it traveled in rural Damascus near a border crossing with Lebanon. The second missile hit after the driver managed to get out of the vehicle. Hezbollah has been fighting in Syria along the Assad forces. The terror organization mostly has targeted Syrian civilians who are unwilling to submit to the brutal Assad regime.

The Hezbollah official spoke on condition of anonymity. He didn’t identify the passengers but said no one was hurt. If Israel is targeting terrorists, the likelihood the targets are planning for attacks on Israel is almost a certainty; or preparing to.

The Assad regime has officially closed the border crossing. Except for commercial transit, as part of the measures to prevent the spread of the coronavirus.

Syria state media also reported the attack, saying it targeted a civilian car and left material damage only. It did not elaborate.

There was no immediate comment from Israel, which rarely confirms individual attacks targeting Iranian and allied forces inside Syria.

The drone attack near the Jdeidet Yabous border crossing came a week after Israel’s military released a video it said shows Syrian officers and Hezbollah members working together on the edge of the Israeli-occupied Golan Heights. Israel has warned for years of what it calls Iran and Hezbollah’s “entrenchment” in southern Syria close to Israeli army positions.

There have been several drone attacks near the Golan Heights in recent months targeting Syrians said to be working with Hezbollah, according to Syrian opposition activists.

Israel Keeps Hezbollah in a Constant State of Fear