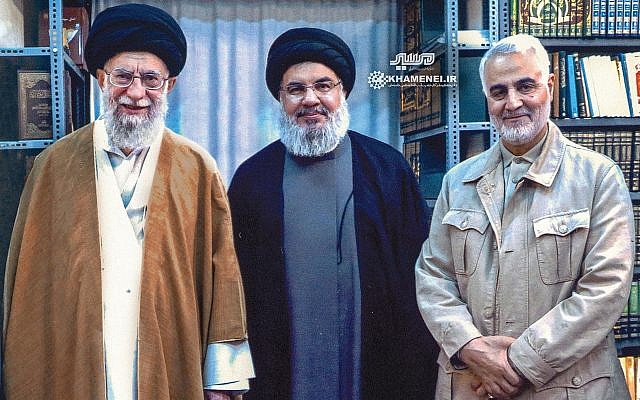 Iranian Agent of Death in the Levant

Let’s play this scenario out for effect and balance to describe the Iranian agent of death in the Levant.

Just imagine, for a moment, the National Rifle Association, an organization that lobbies Congress in support of the Second Amendment of the U.S. Constitution, asks its members to head to Washington to dismantle, by force, a peaceful demonstration on the Mall. On orders from Putin and paid for by Russia. Does this sound outrageous? This is the exact role of Hezbollah in Lebanon. It is an Iranian agent of death spreading violence in Syria, Israel, and Lebanon.

It is a brazenly barbaric behavior to every American who believes in their own democracy. But to Hezbollah, it is just another day at the office. Its role is to submit the free Lebanese people to Iranian hegemony and oppression while it sings the national anthem. The fact Iran funds Hezbollah does not seem to register with many in Lebanon. Hezbollah’s treachery is the mother of all treacheries.

WHEN IN DANGER, JUST SAY “ISRAEL”

How does Hezbollah do it? In addition to faking its true pro-Iran nationalist identity, it also diverts attention away from its treachery by pointing the finger at Israel. By claiming it is championing a Lebanese call to stand up to Israeli aggression. When in fact, it is Iran that is aggressing the Lebanese people, and the latest protests demonstrated amply Hezbollah’s role when it dispatched its thugs to beat up the demonstrators.

Hezbollah’s treachery is the mother of all treacheries

SILENCE ON THE WESTERN FRONT

For the moment, the deafening silence emanating from Washington is exactly the best strategy to save Lebanon. Why give ammunition to Hezbollah? Lebanon’s problems are 100% domestic, and no country should interfere. Any foreign interference, even in words, would only benefit the terror of the Iranian agent.

That does not preclude the supreme terrorist in Tehran from making unbelievable accusations against the United States and Israel. What reforms, Khamenei might be asking? What economic problems in Lebanon? It is all fake. Foreigners are stoking the flames of dissent. Lebanon is doing fine with us in control.

The Iranian agent of death and violence in The Levant has to die. Dismantled piece-by-piece to give the Lebanese people the breathing room they need to save their country. As long as Hezbollah is armed to the teeth, no western politician should sleep on the wheel.

If Lebanon goes, so will any hope of eradicating extremism and barbarism on the Mediterranean. Just reflect on how easy it is to reach Europe, and if the helpless Syrian refugees easily accessed the shores of Europe, so will Iran one day to avenge the western civilization.

Iranian Agent of Death in the Levant