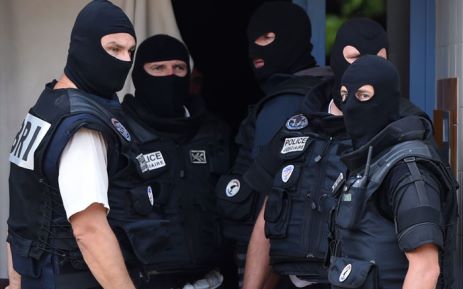 ISIS Struck Back in Tunisia, France, Kuwait and Syria

June 26, 2015 2:03 pm 0
Of Psychpaths and Cowards
Did We Reach the Limit of Syrian Tragedy?
France Teaching Obama How to Strike Terrorists

Police are on high alert in Tunisia, France, Kuwait and Syria after several deadly attacks on Friday. ISIS struck back with vengeance in Europe, North Africa, the Gulf, and the Levant.

One person was killed in an gas explosion in France, 28 people were killed in a beach hotel attack in Tunisia, 25 worshippers were killed by a suicide bomber in a mosque in Kuwait and 145 died in an attack in Syria.

There’s now a security lockdown in Sousse following an attack where at least 28 people, including foreign tourists, were killed when at least one gunman opened fire on a Tunisian beachside hotel in the popular resort, an interior ministry spokesman said.

Police were still clearing the area around the Imperial Marhaba Hotel and the body of one gunman lay at the scene with a Kalashnikov assault rifle after he was shot in an exchange of gunfire, a security source at the scene said.

It was the second major attack in the North African country this year, and took place during the holy Muslim month of Ramadan.

“One attacker opened fire with a Kalashnikov on tourists and Tunisians on the beach of the hotel,” said a hotel worker at the site.

“It was just one attacker. He was a young guy dressed in shorts like he was a tourist himself.”

No one immediately claimed the attack, but Islamist jihadists have attacked North African tourist sites before, seeing them as legitimate targets because of their open Western lifestyles and tolerance of alcohol.

Six other people were wounded, the ministry spokesman said.

Irishwoman Elizabeth O’Brien, who was staying at a neighbouring hotel with her two sons, said there was panic on the beach when gunfire erupted.

“I honestly thought it was fireworks and then when I saw people running… I thought, my God, it is shooting,” she told Irish radio station RTE.

“The waiters and the security on the beach started to say ‘Run, run, run!’”

Sousse is one of Tunisia’s most popular beach resorts, drawing visitors from Europe and neighbouring North African countries. Tourism is also a major source of income for the government.

Tunisia has been on high alert since March, when Islamist militant gunmen attacked the Bardo museum in Tunis, killing a group of foreign tourists in one of the worst attacks in a decade in the North African country.

ISIS struck back in Tunisia.

At the same time, the government has stepped up security across France after a suspected Islamist terrorist attack near the town of Lyon.

One man was decapitated and several others injured after two men drove into a gas factory.

It’s now being reported that the person found beheaded was in fact the manager of the man suspected of ramming a vehicle into canisters causing an explosion.

Witnesses reported hearing a number of explosions inside the premises.

At least one man has been arrested and is being held by police.

French President Francois Hollande has cut short a visit to a European Union summit in Belgium to return home.

Prime Minister Manuel Valls described the terrorist threat as being at its maximum and said that the French government was doing everything it can to protect its citizens.

Hollande has called for calm.

“The suspect has been arrested and identified. Investigations are underway and I will leave the authorities in charge of that.”

Witnesses to today’s attack say that a vehicle was seen driving back and forth past the Air Products gas factory in L’Isle-d’Abeau near the south-eastern town of Lyon.

Two attackers are then believed to have crashed into the premises before a number of explosions were heard.

An Islamist flag was discovered at the site and it is believed that at least one arrest has already been carried out by French police.

A decapitated body covered in Arabic writing was found at a US gas company after the deadly explosion.

The identity of the beheaded victim was not clear but French media said it was a manager of a local transport company, on the site for a delivery.

Hollande described it as a terrorist attack and said all measures would be taken to stop any future strikes on a country still reeling from Islamist assaults in January.

Interior Minister Bernard Cazeneuve said one suspect, named as Yassin Sahli, had been arrested and police were holding other suspected accomplices.

He said Sahli did not have a criminal record but had been under surveillance from 2006 to 2008 on suspicion of having become radicalised.

However the number of assailants was thrown into doubt, with Hollande saying it could have been either one or two.

French media said Sahli was a 35-year-old professional driver who lived in the Lyon suburbs. There was no official confirmation of that.

It was not known whether the victim, so far the only known fatality in the incident that also injured two people, was decapitated before or after the car smashed into the building, or whether the victim had been on site at the time of the attack, or killed elsewhere.

“The attack was of a terrorist nature since a body was discovered, decapitated and with inscriptions,” Hollande told the news conference.

Police sources earlier said the decapitated body was found at the site, along with a flag bearing Islamist inscriptions.

Local newspaper Le Dauphine said the head covered in Arabic writing was found on a fence.

The French public prosecutor said its anti-terrorist section had been deployed to investigate.

ISIS struck back in France.

In Kuwait, the death toll from a suicide bombing at a Shi’ite mosque has now risen to 25.

Eight others were wounded when a man entered the place of worship and blew himself up during Friday prayers.

All the wounded have been taken to hospital.

In a statement released this afternoon, the Islamic State claimed responsibility for the attack.

It was the first suicide bombing attack on a Shi’ite mosque in the small Gulf Arab oil exporter, where Sunnis and Shi’ites live side by side with little apparent friction.

Islamic State on Tuesday urged its followers to step up attacks during the Ramadan fasting month against Christians, Shi’ites and Sunni Muslims fighting with a US-led coalition against the ultra-radical group.

Kuwaiti parliament member Khalil al-Salih said worshippers were kneeling in prayer when a suicide bomber walked into the Imam al-Sadeq Mosque side and blew himself up, destroying walls and the ceiling.

“It was obvious from the suicide bomber’s body that he was young. He walked into the prayer hall during sujood (kneeling in prayer), he looked …in his 20s, I saw him with my own eyes,” he told Reuters by telephone.

“The explosion was really hard. The ceiling and wall got destroyed,” he said, adding that more than 2,000 people from the Shi’ite Ja’afari sect were praying at the mosque.

The Interior Ministry told citizens to stay away from the scene to allow authorities to investigate.

Kuwait’s Minister of Justice, Awqaf and Islamic Affairs Yaqoub Al-Sanea condemned the ‘terrorist attack which he said “threatens our security, and aims to fracture the country’s unity.”

“Kuwait will remain an oasis of security for all groups of Kuwaiti society and all sects. The government is taking many procedures to protect prayers and mosques.”

ISIS struck back in Kuwait.

AT LEAST 145 KILLED IN SYRIA

Islamic State fighters killed at least 145 civilians in an attack on the Syrian town of Kobani and a nearby village, in what a monitoring group described on Friday as the second worst massacre carried out by the hardline group in Syria.

Fighting between the Kurdish YPG militia and Islamic State fighters who infiltrated the town at the Turkish border on Thursday continued into a second day, a Kurdish official said.

A separate Islamic State assault on government-held areas of the northeastern city of Hasaka was reported to have forced 60,000 people to flee their homes, the United Nations said, warning as many as 200,000 people may eventually try to flee.

Islamic State has a record of conducting large scale killings of civilians in territory it captures in both Iraq and Syria, where it has proclaimed a caliphate to rule over all Muslims according to an ultra-hardline vision of Islam.

The attack on the predominantly Kurdish town of Kobani and the nearby village of Brakh Bootan marked the biggest single massacre of civilians by Islamic State in Syria since it killed hundreds of members of the Sunni Sheitaat tribe last year.

The assault included at least three suicide car bombs. The dead included the elderly, women and children, he said.

The Islamic State fighters were reported to number in the dozens and entered the town in five cars disguised as members of the YPG and Syrian rebel groups.

In their other assault on Friday, Islamic State fighters clashed with Syrian government forces in the south of Hasaka for a second day and shells hit areas in the center, the Observatory said.

It appeared that Islamic State was also fanning out toward the southeast of the city, which is divided into zones run separately by the Syrian government and a Kurdish administration that oversees the YPG.

The twin attacks which began on Thursday showed the fighters returning to the offensive after two weeks of defeats at the hands of Kurdish-led forces, supported by U.S.-led air strikes. Earlier this week the Kurds advanced to within 50 km (30 miles) of Raqqa city, the de facto capital of Islamic State’s self-declared caliphate.

In the latest battles, Islamic State has picked targets where it is difficult for the US-led alliance to provide air support to those fighting on the ground. In Kobani, also known as Ayn al-Arab, aerial bombardment risks civilian casualties in residential areas targeted in the attack.

ISIS struck back in Syria.

ISIS Struck Back in Tunisia, France, Kuwait and Syria

Islamic Terror Strikes France Again
To France: We Are So Sorry We Elected Barack Obama
Sarkozy: 8,000 Killed in Homs in 3 Weeks
Radicalism 567