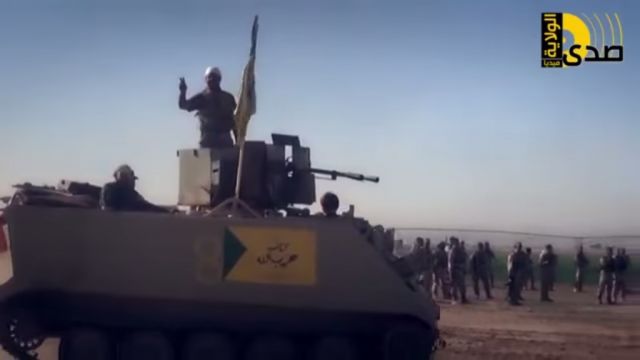 TFS Note: The Obama Administration is deliberately delivering US military hardware to Hezbollah in Iraq. Both Houses of Congress must investigate this act of treachery because Obama would be willing to give Iran top U.S. military secrets if he could do it unnoticed. His most trusted adviser, Valerie Jarrett, is a known communist sympathizer.

A video released on a YouTube account linked to the Popular Mobilization Committee or the “People’s Mobilization Units” (PMU), a coalition of largely Shiite militia forces, shows a montage of Hezbollah Brigades footage from its operations in Iraq’s Anbar province. In the video, the US-designated Foreign Terrorist Organization is seen operating an array of US military hardware, including M113 armored personnel carriers, HUMVEEs, and artillery.

It is unclear how old some of the footage is, but some of the scenes are taken from more recent official releases from the Shiite militia.

The video, entitled “A song of the free men in the land of Anbar,” shows the Hezbollah Brigades (or Kata’ib Hezbollah, its Arabic name) in operations against the Islamic State. Several scenes show the use of US-made M113 armored personnel carriers, Humvees, and M1 Abrams tanks. However, it is unclear who is operating the Abrams, as the militia operates closely alongside the Iraqi Security Forces. Hezbollah Brigades has shown possession of at least one of the US-supplied main battle tanks in January. One scene, which is from an older video, shows a US MRAP (Mine Resistant Ambush Protected) vehicle being hit with a roadside bomb. It is unclear if the footage is from an attack on an Islamic State-operated MRAP, or if the video is from the US war in Iraq.

Other scenes show the use of rockets, mortars, anti-aircraft guns, technicals, and small arms to combat the Islamic State. Some scenes are from a recent official Hezbollah Brigades release on operations in Anbar. That video, which is more than 10 minutes long, also shows the use of US weaponry. In addition to similar scenes from the montage, the group is shown disabling improvised explosive devices (IEDs) and conducting other ground operations while supported by Iraqi helicopters overhead.

In addition to the videos, Hezbollah Brigades has also issued rewards for anyone who captures non-Iraqi Islamic State fighters. According to the group, Western European or American fighters are worth $12,000. Fighters from the Arabian Peninsula, Lebanon, or Algeria are worth $10,000, while fighters from the Caucasus, Turkey, or those of ethnic Uighur descent (native to the western Chinese province of Xinjiang) are worth $7,000. The group excludes fighters from Syria, Afghanistan, or Pakistan from the rewards.

Hezbollah Brigades has also been involved in operations near the town of Karmah, just east of Baghdad. As the Islamic State was preparing to take control of the provincial capital of Ramadi, the group also launched a counteroffensive on the town of Karmah and surrounding areas. Fighting is still ongoing in the area, and Anbar Daily claims that the Iraqi forces have made advances in the town in recent days.

Abu Mahdi al Muhandis, a former commander in the Badr Organization who was listed by the US government as a Specially Designated Global Terrorist in July 2009, directs the Popular Mobilization Committee. The US government described Muhandis, whose real name is Jamal Jaafar Mohammed, as “an advisor to Qassem Soleimani,” the commander of the Qods Force, the external operations wing of the Iranian Revolutionary Guards Corps (IRGC).

In addition to directing the Popular Mobilization Committee, Muhandis is also said to direct the operations of Kata’ib Imam Ali (Imam Ali Brigade) as well as command the Hezbollah Brigades. The Iraqi government has largely depended on these Shiite militias in its major offensives, including in Tikrit and Baiji in Salahadin province.