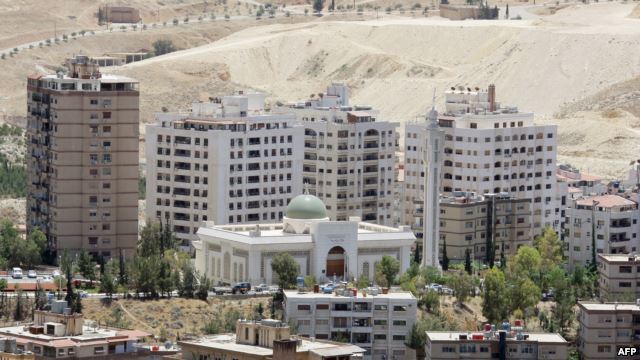 During the early days of Syria’s civil war, Tehran kept Iran’s involvement in Syria mostly from public view. In recent months, though, the government-run media have been reporting how Iran has teamed up with Russia to support Syrian Bashar al-Assad against opposition rebels and the Islamic State group.

Tehran has reportedly increased the size of its Revolutionary Guard Corps in Syria, sending as many as 3,500 fighters to the front lines to defend Zeinab Shrine, a holy site for Shi’ite Muslims in the southern suburbs of Damascus.

According to news reports, rich and conservative Iranian business people with ties to the government are buying expensive properties and lavish homes in the affluent districts of Damascus. The high demand for property has contributed to price increases in Syria’s real estate market, experts said.

“Five million houses have been destroyed in the civil war. The increased Iranian demand to buy land and properties has naturally led to more inflation in the [real estate] market,” Alika said.

Iran has reportedly relied on a prominent Shi’ite cleric, Abdullah Nazzam, to arrange its real estate dealings in Syria. Using his religious authority in Damascus and ties with the Syrian government, Nazzam has persuaded residents to sell their properties to Iranian businessmen.

“Some Iranian businessmen have been offering huge sums of money to buy Syrian houses near a holy Shi’ite site,” a Damascus landowner recently told a pro-opposition Syrian news site, All For Syria.

He said some owners, including himself, had refused to sell their properties, but under Syrian government pressure, they had no choice but to accept the offers, the resident said.

Alika, who studies the trends of local economies in Syria’s civil war, said Iranians tend to buy properties in areas of strategic importance.

“They are buying houses and lands near Shi’ite religious sites in Damascus,” he told VOA by phone.

Iran’s interest in owning real estate in Syria is not new, analysts said, but it increased after the beginning of the rebel uprising in 2011.

“The [Iranian] regime has always been active in the real estate market in Syria, but their boost became more visible,” said journalist Ali Nawaf, a Damascus native living in Turkey.

“After the [Syrian] revolution [in 2011], Iran realized that buying properties in Damascus and elsewhere would give it yet another excuse to continue its interference in Syria,” he told VOA.

“A few months ago I was invited to a work-related gathering, and a fellow veteran contractor with strong ties with [Iranian] authorities informed us that there are very lucrative opportunities for builders in Damascus,” Amir Maghsoudloo, an Iranian construction contractor in Tehran, told VOA.

“When we asked about the security of the site, he said that the zone is even more secure than Tehran,” he said. “I turned the offer down due to family and security reasons, but, two other fellow contractors, as far as I know, got some projects in Damascus.”

Bricklayer Tahir Esmaili, an Afghan national who worked in Iran before moving to Syria in 2015, told VOA some Afghan workers in Iran had been offered construction jobs in Damascus.

Roughly 3 million Afghans live in Iran. Most settled there after fleeing war and conflict in their homeland. Many Afghans in Iran lack basic rights and live without a formal status. Most earn low wages in Iran, making Syria a lucrative alternative.

“There are quite a few projects running near [the holy Shi’ite site of] Sayyida Rouqqaya and the Iranian Embassy,” Esmaili said. “These projects are being dominantly run by Afghan nationals from Iran.”

By buying properties throughout Syria, Iran is seeking to safeguard its presence in the war-torn country, even after a potential collapse of Assad’s government, experts said.

“Iran’s goal of owning property in Syria goes beyond business interest,” said Iranian analyst Fariborz Saremi told VOA from Germany. “Controlling Syria politically, militarily and economically, through real estate, would only make Tehran in a better position to stay in control of other parts of the Middle East.”

Damascus isn’t the only area in Syria where Iranians have been buying properties, analysts said.

In the central city of Homs, local activists said more Iranian business people and companies are looking for new opportunities after the Syrian military and its Lebanese Hezbollah alllies took control of the city in late 2015.

“The [Syrian] regime wants Iranians to invest in Homs, because it connects Damascus to the Alawite heartland in the coastal region,” Nawaf said.

And with more Iranian-owned properties, Iran would have more incentives to maintain a stronger military presence in Homs and beyond, analysts said.