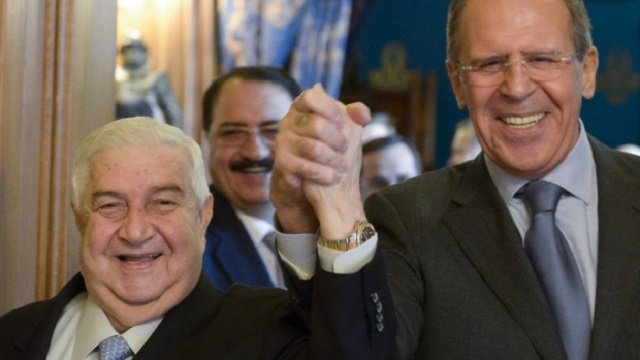 August 14, 2015 9:43 am 0
Russia Will Turn Syria Into Another Afghanistan
Did CIA Agree with Russia on Assad Alternative?
Russia Mainly Bombing Free Syrian Army, Not IS

After talks with Moscow’s top diplomat, Syria’s main opposition group insisted Friday that Russia is “not clinging” to Assad, but rather to Syria’s institutional integrity that “resisted” and destabilized for the Soviets since Assad senior in 1970’s. Russia should forget Syria.

Moscow — one of Assad’s few remaining backers — is pushing a plan for a broader grouping than the U.S.-led coalition fighting the Islamic State (IS) group, to include Syria’s government and its allies. Syrians believe Russia should forget Syria. Their insistence on Assad gave rise to ISIS and to Islamic extremism.

After meeting with foreign minister Lavrov, the Syrian National Coalition reiterated that Assad must go immediately and hinted that Russia’s support for the strongman may be wavering.

“We have found that the Russian authorities are not clinging to Bashar Assad personally, but rather they’re clinging to the Syrian state, its territorial integrity, and the preservation of its institutions,” Head of the opposition told journalists at a press conference.

“We have always said that we do not support Assad in a personal capacity but that we support the legitimately elected president of Syria,” spokeswoman Maria Zakharova told AFP.

In other words, Russia wants to see a tyrannical Syria that destabilizes the region as proxy to Russian schemes. Russia should forget Syria because it is going to be impossible for the Syrian people to exchange one tyrant with another, or to spread terror like the Assads have.

The meeting Thursday is part of a broader diplomatic flurry that saw Saudia Arabia’s foreign minister Adel al-Jubeir fly into Moscow on Tuesday, on the back of a three-way Russian-Saudi-U.S. meeting in Doha earlier this month.

The top diplomat for Saudi Arabia, a key backer of the Syrian opposition, rejected calls to work with Assad against IS after a meeting with Lavrov.

As part of the push, Lavrov was also expected to meet on Friday with the head of a newer grouping of Syrian opposition figures known as the Cairo Conference Committee. This opposition is funded by the Assad regime.

Russia should forget Syria because the longer Russia drags its feet in support of Assad or the likes of Assad, the stronger the Islamists get.

Meanwhile, Obama is missing as if the United States no longer exists. Obama is letting Moscow decide what is best for other countries.