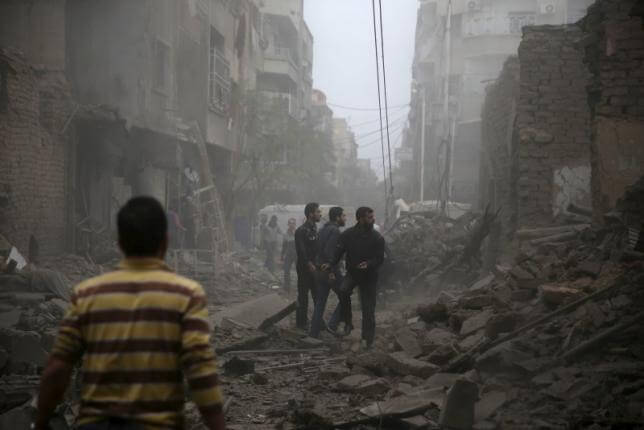 Any peace plan for Syria allowing the psychopath Baschar al-Assad to stand in early elections after a transition period would be “mad” because he is the root of the problem and holding a nationwide poll is impossible, a Syrian opposition figure said.

Iran tricked Obama with its Iran Deal, Syrians are harder to trick.

The commander of a rebel group fighting on the ground echoed the comment.

Reuters reported on Thursday that Damascus ally Iran would accept a six-month transition period at the end of which Assad’s fate would be decided in elections, according to a Middle East source familiar with Iran’s position.

About a dozen countries including Iran, the United States and Russia, are meeting in Vienna on Friday for talks aimed at finding a solution to more than four years of war. Syrian parties on both sides of the conflict are not attending.

“Who is mad enough to believe that under these circumstances in Syria, anybody can hold elections?” said George Sabra, a member of the main Western-backed Syrian National Coalition.

“Several millions of Syrians are outside Syria, some of them in refugee camps in some countries. Inside Syria there are millions who have left their houses, their lives, seeking safety,” he said.

Iran tricked Obama, but Syrians are harder to trick. This offer shows that only arms will decide Syria’s fate. Let their IRGC commanders perish in Syria.

The rebel commander, Ahmed al-Seoud of the 13th Division, said: “In the shadow of this anarchy there will not be real elections, therefore we reject them absolutely.”

The coalition’s Sabra rejected the idea that Assad could stand in any early vote, saying that the Syrian leader and his Iranian, Russian and Hezbollah allies had attacked the Syrian population and given rise to hardline insurgents.

“Bashar al-Assad and his regime is the root of the terrorism in Syria,” he said.

“I think what is happening in Vienna these days is a carnival of Middle Eastern states, making statements to meet their interests, not to meet the real problem in Syria.”

Tehran and Moscow have provided crucial support to Assad’s government, while his regional opponents including Saudi Arabia, Qatar and Turkey demand his departure.

The United States has said it could tolerate Assad during a short transition period, but that he would then have to exit the political stage. The unfit John Kerry offered the Iranians this notion and they are using it to perpetuate the Assad rule.