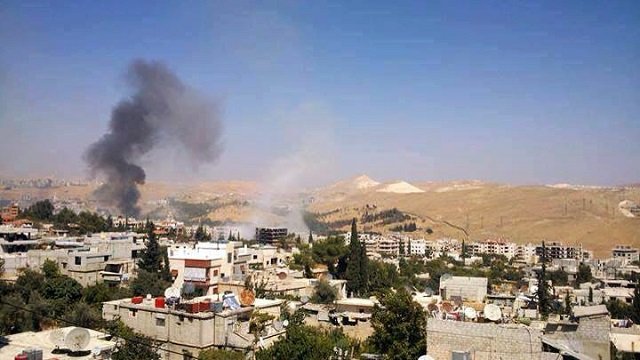 If Putin Thinks Syria Will Be Less Painful Than Afghanistan

October 13, 2015 4:56 am 0
Do You Speak Pushtu?
Of Masochistic Non Interventionists and Their Flying Saddles
The Strange Case of Dr. Obama and Mr. Hyde

If Putin thinks Syria will be less painful than Afghanistan, he needs to rethink his policy 0f shoring-up the psychopath Baschar al-Assad whose family dates back to the Cold War days. If Putin thinks Syrians, in the 21st century, are going to stand in-line to enter Assad’s torture dungeons voluntarily, he is sorely mistaken.

Some 300 people had begun to gather for a demonstration backing Russia’s recent intervention in Syria when the rockets crashed into the embassy compound in the Mazraa neighbourhood of the capital, AFP journalists at the scene said.

There was widespread panic, but it was not immediately clear if anyone had been wounded or killed. If Putin thinks Syria will be less painful than Afghanistan, Syria will teach him that tyranny under Assad is no longer an option.

The demonstrators had been waving Russian flags and holding up large photographs of Russian President Vladimir Putin.

Activists said the rockets were fired from the eastern edges of the capital, where rebels are entrenched.

The Russian embassy has been the target of rocket attacks before.

On September 21, just nine days before it began its air war in Syria, Moscow demanded “concrete action” after a shell hit the embassy’s compound in Damascus.

In May, one person was killed by mortar rounds that landed nearby. Three were hurt when mortar rounds landed inside the compound in April.

If Putin Thinks Syria Will Be Less Painful Than Afghanistan

The Crisis of ISIS
IED’s in Syria
Commemorating the 10th Anniversary of 9/11: Let us Never Forget
Putin Terror 436