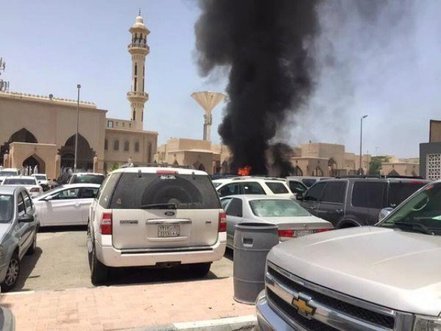 This is how Shia Iran sacrificing Shia Arabs to expand its footprint in the Arab world.

A car blast outside a Saudi mosque during Friday prayers killed four people, including its driver, in an attack that was “foiled” by the authorities, the interior ministry said.

“Authorities have managed to foil a terrorist crime targeting people performing the Friday prayers at Al-Anoud mosque in Dammam,” capital of Eastern Province, said a ministry spokesman quoted by the Saudi Press Agency.

Iran is trying to sow chaos in Saudi Arabia to avenge Saudi strikes against the Houthis in Yemen. Although ISIS claimed responsibility, Iran using ISIS as a proxy for its war against Saudi Arabia is the perfect proxy game. This is how Shia Iran sacrificing Shia Arabs for its own sinister purposes.

The explosion went off as security officials approached the car while it was being driven to a parking lot near the Shiite mosque, the spokesman said.

“When they headed towards it, it exploded killing four people, at least one of them believed to be its driver,” he said, adding that other nearby vehicles caught fire.

The blast is the second in a week after a suicide bombing on a Shiite mosque during Friday prayers in a village in Eastern Province killed 21 people. How Shia Iran sacrificing Shia Arabs.

Authorities have said that the attack on May 22 was carried out by militants from the Islamic State group, who claimed responsibility.

A witnesses of the latest attack, Nassima al-Sada, said it was carried out by a suicide bomber who blew himself up after security volunteers tried to stop him from entering the ladies side of the mosque — the only Shiite mosque in Dammam.

Women were not allowed to pray at the mosque this week over security fears, Sada said.

The interior ministry spokesman said that investigations were ongoing.

In November, gunmen killed seven Shiites in the Eastern Province town of Al-Dalwa.

Most of the kingdom’s Shiite minority live in the oil-rich east but have long complained of marginalization.

The alSaud that you don’t know
Is the Arab League Trading Syria for its Security?
First, negotiate with terrorists, then free terrorists
Radicalism 567