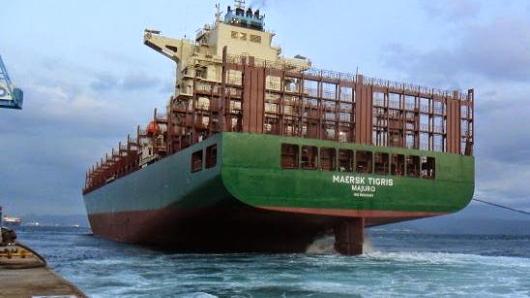 Al Arabiya News Channel has reported on Tuesday, citing Iranian news agencies, that Iran has opened fire at a U.S. cargo ship and directed it to Bandar Abbas port on the southern coast of Iran.

As it turned out, the commercial ship named MV Maersk Tigirs was registered in the Marshall Islands, closely associated with the United States since WWII.

The 65,000 tons commercial vessel was listed as sailing from the port of Jeddah, Saudi Arabia heading to Jebel Ali port in the United Arab Emirates.

Is this Hormuz Iranian piracy the beginning of a new sinister terror policy of Iran? Is Iran signaling its sovereignty over local commercial traffic in the Strait of Hormuz? The fact the ship was not carrying oil and only traded between Saudi Arabia and UAE signals this Iranian piracy is a local act of terror that highlights Iranian rivalry with Saudi Arabia.

How will Saudi Arabia respond to this act of piracy remains to be seen.

Meanwhile, Barack Obama ignores this Hormuz Iranian piracy hoping it does not make too many waves that could add to the criticism leveled against his US-Iran deal. The world may see the Iranians as pirates, but Obama sees them as his partners regardless of the number or severity of crimes they are willing to commit.

Don’t be surprised if Rouhani gifts Obama a parrot if the US-Iran deal ever gets signed.

According to U.S. Energy Information Administration (EIA), some 17 million barrels per day, or roughly 30 percent of all seaborne-traded oil, passed through the Strait in 2013. This Hormuz Iranian piracy should be a concern for all international countries trading oil with the Middle East.

Iran has in the past threatened to block the Strait to advance its terror agenda.

The Strait of Hormuz is a narrow strip of water separating Oman from Iran. At its narrowest point, the Strait is only 33 km (21 miles) across.

Saudi Arabia, It’s Your Turn
Saudi Arabia Should Recall Its Ambassador to the US
Nuclear Hedging
Radicalism 567