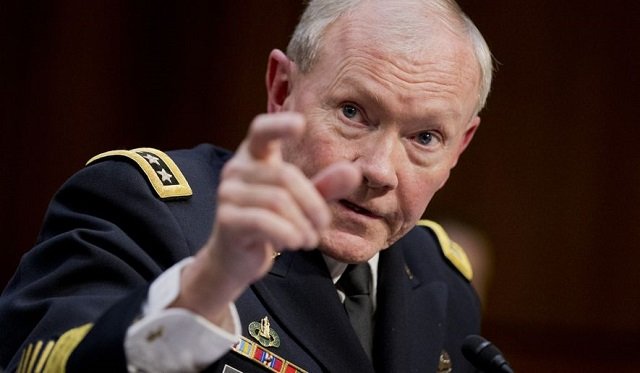 July 19, 2013 9:02 am 0
Why Would Russia Agree to Investigate Assad’s Use of Chemical Weapons?
Obama and Syria: a trail of half-steps, mixed messages
What is the Mystery Behind Assad Bragging?

The nation’s top military officer, Gen. Martin Dempsey, came under fire from Sen. John McCain over the issue of Syria in a testy exchange Thursday at Dempsey’s confirmation hearing.

McCain, who supports a stronger role in supporting rebels in Syria, accused the Obama administration of inaction in Syria and questioned the quality of advice Dempsey has provided to the White House over the past two years.

McCain, R-Ariz., suggested the risks of inaction in Syria outweighed risks the United States would face in engaging more actively in supporting rebels.

“We have not been inactive,” Dempsey countered.

The White House has said it will arm rebels, but opposition leaders in Syria say they have yet to receive those weapons and momentum is shifting toward government forces loyal to the [psychopath] Baschar Assad.

Dempsey later acknowledged that the “tide has shifted” in favor of Assad’s forces. He also said the momentum ebbs and flows between the two sides.

“How do we account for those pirouettes?” McCain asked.

“We have adapted our approach based on what we know of the opposition,” Dempsey said.

The U.S. government has been concerned about the presence of al-Qaeda affiliated extremists within the Syria rebel groups, a factor that complicates any policy of supporting rebels.

“We wouldn’t be starting a war,” McCain, said of ramping up military support to the rebels. “We would be trying to stop a massacre that’s going on.”

“Senator, would you agree that we have recent experience where until we understood how the country would continue to govern and that institutions of governance wouldn’t fail, that actually situations can be made worse by the introduction of military force?” Dempsey said.

“You and I went through this in 2006,” McCain said. McCain said Dempsey disagreed at the time with what came to be known as the “surge” strategy in Iraq, which involved sending additional forces to Iraq and changing the way troops were employed.

“I think history shows that those of us who supported the surge were right, and people like you, who didn’t think we need a surge were wrong,” McCain said.

Dempsey said the Pentagon has provided a range of options for Syria to the White House, but which of them to pursue is a decision for elected leaders.

What is Wrong with the Middle East?
The Unbiased Guide to Understanding The Civil War in Syria
Syrian war’s brutality isn’t going away
Slippery Barack Obama 976